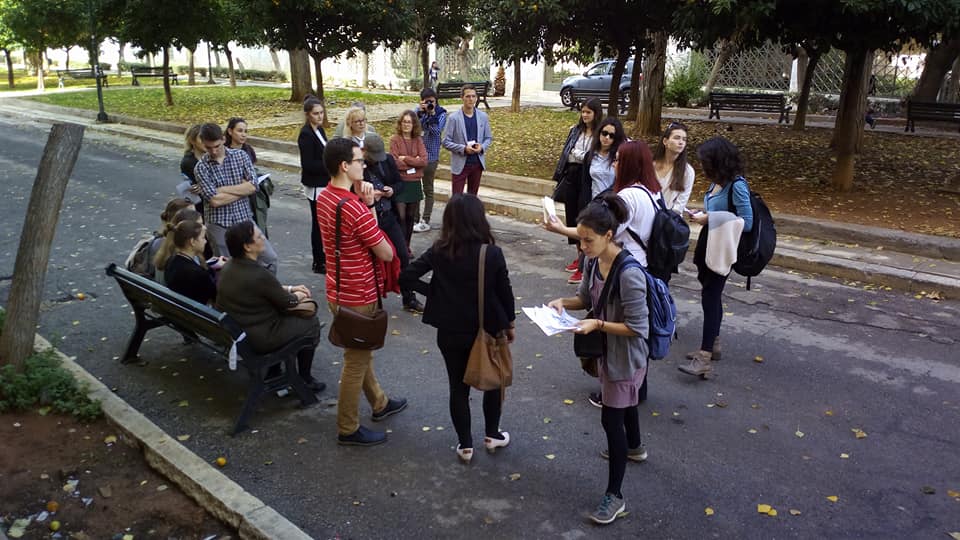 Under the Europe for Citizens programme, the students of the Polytechnic of Economics Alternative Secondary Grammar School studied how civil society had contributed to the fall of dictatorship and the transition to democracy. Within the “Let’s Build a Democratic Europe Together” project, they examined the issue in five European countries: Hungary, Germany, Poland, Slovakia and Greece. Besides the programme events, the era was also presented through video interviews made by the students, as well as questionnaires and exhibitions. We asked Project Coordinator Adrienne Varga about the experiences.

Why did you consider it important to apply within the European Remembrance programme?

Our school runs a number of international projects; we want our students to gain intercultural experience, to meet other young Europeans and to learn about other cultures and the history of other countries. In this project, the partners address various issues from the last decades of the dictatorial regimes of their respective countries. We are the main beneficiaries of the programme; our topic is the struggle for the freedom of press in the 1970’s and 80’s and the appearance of samizdat.

What topics did your foreign partners choose?

The Polish partner focuses on the Solidarity union movement, whereas our German and Slovakian partners study the civil activities supported by the Church in the German Democratic Republic and Czechoslovakia. Greece had a military dictatorship between 1967 and 1974; our Greek partner studies the university strike and demonstrations of autumn 1973, which eventually led to the fall of the junta. Our foreign partners are not schools, but civil organisations; however, they, too, laid great emphasis on involving young people in the programme. With the exception of Slovakia, each country organises a public event, where we seek to involve not only the project partners, but also the local citizens.

What joint efforts had preceded these events?

In each country, a questionnaire was completed about how people had lived in the era of dictatorship, how they assessed the given period in retrospect, and how much they knew about their partners’ topics. The questionnaires were processed in an analysis, summarised by a sociologist, and the description of the historical background to it was written by a history teacher colleague of ours. The students made video interviews with civilians who had participated in the struggle against the dictatorship and contributed to its fall. In Hungary, we interviewed six former activists who had written, edited, printed or distributed samizdat in the 1970’s and 80’s.

What were the findings of this research?

In each country, we had 50-60 respondents, so the survey can’t be regarded as representative. Its primary goal was to educate young people about life under dictatorship – travel opportunities, consumer goods, trust towards authorities and the direct environment, listening to the broadcasts of Free Europe Radio, contact with members of the resistance, the regime change and its retrospective assessment. Based on the responses given in each country, a nearly 30-page-long analysis was prepared.

What do you think the students will benefit from the programmes and their involvement in the research?

They can learn a lot from them, since at school, in history classes, there’s just not enough time to study dictatorship and the transition to democracy in detail. We prepared them for the respective events of each country at afternoon sessions before the event. Due to their age, certain expressions needed explanation: formerly they hadn’t heard about samizdat, scarce commodities or border guards. We shouldn’t forget that these young people have spent most of their lives as EU citizens.

How many Hungarian students were involved in the project?

There were twelve students who continuously worked in the project: they managed the completion of the questionnaires, shot, edited and subtitled the video interviews, and they also attended some events abroad. But we involved many students in certain activities; first on 15 March 2017, and then in our event held between 12-14 March 2018. It was mainly our creative handicraft workshops, linked to the theme of free press, which were attended by many of our students.

What other programmes were on offer at the Hungarian event in March?

On the first day of the event, we took our foreign partners to the Memento Park, where we held a guided tour and learnt about the dictatorship before 1990 through public statues, documentaries and an exhibition. Then we went on a thematic walk in Budapest to the scenes of samizdat production and distribution, as well as those of former mass demonstrations.

Since our Budapest event was organised in cooperation with our Slovakian partner, on the second day historian Peter Jasek presented the Czechoslovakian opposition demonstrations of 1988-89, with special emphasis on the Bratislava Candle Demonstration. It was followed by our public programme at the Central Gallery, where, under the guidance of representatives from the OSA, our students held an exhibition on samizdat, called ‘First Demand Press Freedom’. The programme began with a presentation on the Eastern European history of samizdat, given by historian András Mink, and then we presented a Hungarian and a Slovakian video interview, made by youths from the two countries. As the closing act of the day, we organised a round-table talk with the interview subjects, Gábor Demszky and Vladimir Krcmery, who were joined by the representative of the Nyomtassteis movement, Kornél Klopfstein-László.

The formerly mentioned workshops, linked to the theme of press freedom, were held on the final day of the event: making animations and wall panels, samizdat production using ‘ramka’ technique, etc. Finally, we organised a photo exhibition at our school of contemporary photographs presenting the partners’ topics.

What were the most memorable elements of the former events held by your foreign partners?

In Dresden, for example, our guide was a lady who had been personally involved in the demonstrations which eventually led to the fall of the Berlin Wall. So she didn’t only speak about historical facts at the venues, but also shared her personal memories with us. In Poland, we met an old lady, a former Solidarity activist, who had spent years in prison for her participation in the movement. In Greece, we were shown the original prison cells and interrogation rooms at the Museum of Democratic Resistance, and we also had an opportunity to talk to former participants of the anti-junta uprising. At each location, the most exciting and memorable elements for the students, too, were the personal ones.

What long-term benefits may the project bring?

In the case of young people who were born in a democracy, the most important benefit is that the project makes them interested the given era and issue, and calls their attention to the importance of democracy and civil movements, as well as the dangers of dictatorship. And as far as our school is concerned, we have built working relationships with foreign civil organisations which may lead to further cooperation in the future. Our Greek partners, for example, are very experienced in Erasmus+ youth exchange programmes, and we would gladly join one of their projects of this kind.