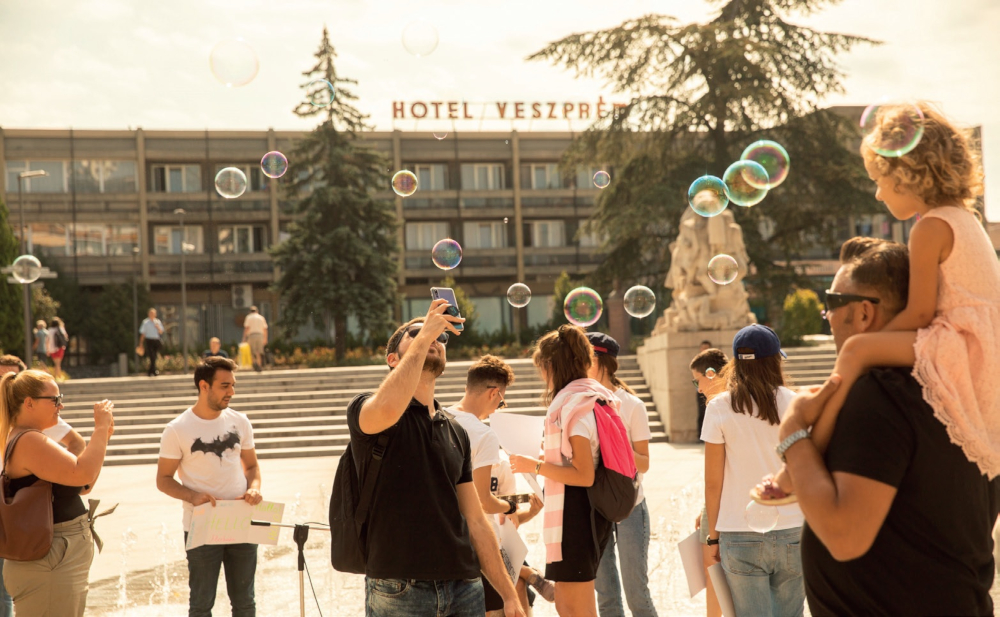 The project called Reveal YouropEaN Cultural Heritage (ENriCH) was launched in autumn 2018 in a partnership of five countries. They have set an ambitious goal: they want to fill the term‚ ‘cultural heritage’ with a new meaning for youth. We asked programme coordinator Anna Knauer, colleague of the Strategic Department in the Municipality of Veszprém about how they plan to achieve that.

Based on the title of the programme, it seems obvious that the organisers are focusing on young people and seek to address cultural heritage from their perspective. But what is the most important goal of the project?

Perhaps the most important goal is to let young people know what Europe has given to their towns, and vice versa, what their towns can give Europe.

When hearing the expression ‘cultural heritage’, most people think of some monument or building.

Yes, that’s true, and that’s exactly why we think this project is very important. It would be great to expand the meaning of the expression. As regards the actual elements of cultural heritage, we left their contents up to the young people who actively participate in the project. Of course, to some extent we determined the focus with the topics of the events. At meetings we organised, for example, we held sessions to help young people better define what cultural heritage means to them. In fact, from literature through built heritage to gastronomy, anything can be included.

Veszprém was among the Hungarian towns which had applied for the Europe’s Cultural Capital 2023 title. This current project will definitely increase your chances to win.

We hope so. On the one hand, the ECC application was one of the driving forces behind this project. We regard ENriCH as an important phase and support of the preparation, as the two projects set a lot of similar goals. Both projects put great emphasis on community building and involving young people in the town’s life, for example. On the other hand, there’s a significant need for discovering, or more exactly, re-discovering cultural values and our own town, as well as for presenting values which used to offer something to Europe and which still do; values which have had an impact on Europe’s cultural heritage. This project mostly seeks to discover this latter dimension. One of the major questions is how youths’ approach to cultural heritage changes.

How are you going to measure that?

At the beginning of the project, each partner town makes a survey on young people’s opinions about what cultural heritage means to them and how conscious they are about European values within their own lives. The same survey containing the same questions is conducted again at the end of the project, and thus the change in young people’s attitudes becomes measurable and comparable based on their answers.

Teams from altogether five countries, including Hungary, are working together. What’s your schedule for the months to come?

We held our opening event in Veszprém in September 2018, and we will be organising the closing event, too. Between the two, each town will host one or two events. For example, in February we’re going to meet in Slovenia, where we’re going to discuss Europe’s multicultural diversity. In May 2019, the ENriCH programme will be linked to the event series of ‘Gizella’ Days in Veszprém. We’re going to discuss how Hungarians integrated into Europe since St. Stephen and how we’re still integrating, to this day. In contrast, the Austrian partner in Eisenstadt will be focusing on music, Saint Omer, France on archaeology, whereas Tartu, Estonia on the Hanseatic heritage.

An important goal of the project was to involve young people in planning and organising the programme. How do you implement that?

Our plan is to set up a team in each town, consisting of young people aged 16 to 25 and decision-makers. Then the youths decide in rotation which team of 2-4 to travel to a particular event with the staff. As regards their actual duties, they will, for example, make interviews with elderly locals who can tell them a lot of interesting facts about Veszprém. These interviews will help them prepare their own maps of Veszprém, indicating the places which they consider important.

One stereotype about today’s youth is that they like to spend their free time with their smart devices and social media most. How do you think they can be most easily attracted to such a project?

They find it attractive to be able to travel, to meet foreign youths, and they are aware that getting in touch with other, foreign students may have a life-long impact on their lives. Meanwhile, they are faced with novel tasks and they are also key players in a programme. At the project events we seek to organise programmes and tasks which improve their skills, such as their English and presentation skills or debate culture. Former experiences show that students do appreciate it. As far as their smart devices are concerned, using them is of great help to all of us. The students got also partly involved through online platforms, so, although it’s an ambivalent situation, today it’s also inevitable.

What were you personally most enthusiastic about in this project?

I love working with international partners and learn about the work conducted in other organisations. I’m particularly glad that it happens within a community organising project. I think it’s very important that by the word community we should not only mean family, but se it in a much broader sense. Young people should definitely take a look outside their own worlds and countries and experience what it’s like to be European. I’ve already got some experience in this field, and it will be nice to share it with current students.

You may have various expectations about the outcomes of the project. Which is the most important one?

We first of all expect continuous learning and exchange of experience. We also expect that at the end of the project the young people can fill the notion of cultural heritage with a richer content. It would be great to deliver the messages to as many people as possible. Therefore, at the end of the project we’ll make a closing publication in both printed and online forms, in which we’ll summarise our experiences, present our partners, as well as the outcomes of the questionnaires and the maps. We also consider it important that finally the organising teams will make recommendations to the decision-makers, and thus, in the long term, even more people can re-discover their own local heritage.

Who are your key specialist partners in the project?

One of them is HÉTFA Research Institute and Centre for Social and Economic Analyses. They helped us come up with ideas to be included in the project application of Veszprém to match the concept of Europe’s Cultural Capital, as well as the town’s profile. Of course, besides HÉTFA, our foreign partner organisations also contributed a lot to the final form of the application submitted.

Are you expecting difficulties?

We have built a great team, with experienced and committed partners, so I’m confident that we can overcome any potential obstacles together. One of the benefits of the project will be the very fact that it can bring the partners closer together. •