Main PageStories and best practicesBeyond enviromental protection and EU issues: „Our primary goal was to get to know each other better!”
Europe for citizens 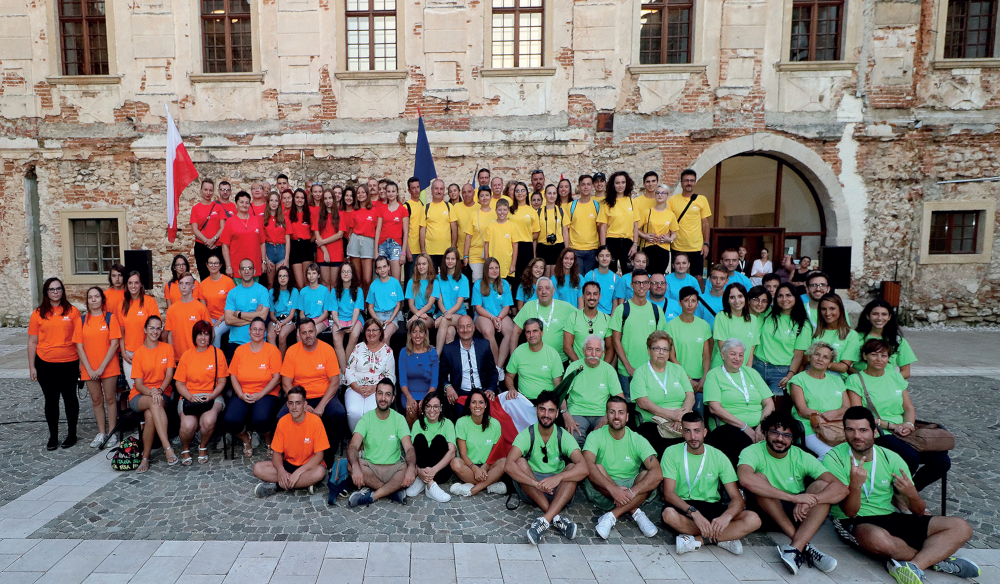 The project called Local Environmental Efforts in the Light of the EU’s Environmental Policy was implemented with the support of the Europe for Citizens Programme Town Twinning measure. Although the emphasis was on environmental protection, the project covered a number of other areas, too, from EU institutions through gastronomy to folk dance. I asked project coordinator Gabriella Borbásné Gazdag, International Relations Officer at the Municipality of Várpalota about the achievements and challenges of the project.

Beyond enviromental protection and EU issues: „Our primary goal was to get to know each other better!”

Although the project focused on environmental protection, other issues were also discussed. What were the most important goals of the project?

We had organised an international meeting for the third time. Just like formerly, our primary goal was again to get to know each other better. Within that, the emphasis was indeed on the challenges of environmental protection and EU issues we were concerned by. It was also important to establish closer relationships with our twinned towns, Petrosani, Romania and Grottazzolina, Italy, as well as with our partner towns, Ilok, Croatia and Psary, Poland. We also wanted to find out what other fields could offer opportunities of long-term cooperation.

How were all these implemented in practice?

We organised a number of programmes, from various games through presentations to common cooking and a folk dance evening. As regards more serious issues, the team from the Croatian partner town gave a presentation on EU institutions, the Italians on migration, whereas the others, including us, on environmental protection.

How did your audience receive these serious topics in the August heat?

We had all known what topics we would be addressing within the project, so nobody was taken by surprise. We tried to hold the presentations in the morning hours and address each topic in an entertaining manner, which may have helped the audience forget about the heat a little.

Over 400 people attended the programme, out of which 104 came from abroad. Who did the Hungarian organiser team consist of?

The director and staff of the Gál Gyula Sports Hall assumed a lion’s share in organising and implementing the evenings and dinners, whereas the presentations on the EU were the university students’ responsibility. Besides, the implementation team included staff from the Thury Castle, secondary school students, NGO’s and municipality staff. We wanted as many people to be involved in the organisation as possible; in retrospect, we can be very grateful to them, including our own family members. We needed everybody’s contribution very much.

What were the secondary school students’ responsibilities?

They joined the teams and accompanied them everywhere in twos, providing them tour guidance in English and Italian. Two boys from secondary school made three fantastic videos about the major events.

As far as I know, the representatives of each country gave presentations on environmental protection. Which one did you find the most interesting?

I think it was the Polish team’s presentation. We Hungarians are inclined to start from the negative aspects and talk about problems. In contrast, the Polish gave a presentation about the future, for example, how they will create green classrooms or use renewable energy.

Looking at the programme, Hungary’s introduction was very varied. From the wildlife of Lake Balaton to Hungarian gastronomy, from environmental challenges to presenting the everyday work of an NGO in Várpalota, a multitude of topics were covered. What do you think others found the most memorable thing about us?

Hungary has a good reputation; foreigners love and admire Budapest, but as I saw it, everybody was impressed by the beauty of Lake Balaton and the hills of Bakony, too.

You mentioned that the Italians gave a presentation on migration. What was the key message of their presentation?

The presentation addressed the issue of Struggle against the Stigmatisation of Refugees, a priority issue within the Europe for Citizens Programme. What I consider the key message of the presentation is that successful integration can be achieved through locally and consciously implemented programmes. When somebody lives in a constant danger of death because of their faith, and is therefore forced to leave their home country, that requires real attention and support.

How successfully do you think the Italian partners delivered their messages?

Entirely, because they were speaking about real experiences. The town of Grottazzolina has been closely affected by the integration of migrants for decades. Their municipality must pay attention to the issue and come up with their own solutions. Grottazzolina has 3,000 inhabitants, and based on their distribution quota, the town had to receive a total of sixty refugees. They talked about the jobs they’d offered to refugees, how they taught them Italian and what other ideas they had to facilitate integration. It was very interesting to see through the actual steps taken by a small town today for the refugees they receive. On the initiative of the local football team, the refugees organised their own football team, too, and the citizens began conversations with the refugees to get to know each other better.

What were you personally most enthusiastic about?

I was mainly inspired by the close cooperation and good relationships established with the foreign partners. I’d known nearly half of our guests from former projects. It’s important to emphasise that in this project the partners were small towns and settlements. The towns which got acquainted were ones that hadn’t even heard about each other before. By the end of the programme, they had developed a kind of trust relationship which will continue in further programmes in the future.

Looking back, what do you see as the most successful part of the programme?

The evening programmes, when we could spend time together informally. Every evening another nation cooked the meal, and we also held folk dance evenings – the Polish, for example, brought their own folk band and clothing. Everyone danced with everyone; it didn’t matter what nationality they were or how old. The dance floor was filled with mixed couples. I remember that was exactly what touched me three years ago, too, when the young and the old danced together without any geographical or generational boundaries. I wanted to experience that once more very much, and I’m happy that it happened.

What, in retrospect, do you consider the greatest challenge?

Organising accommodation. There weren’t enough places in Várpalota to accommodate everyone. Besides, allocating the funds that we had been granted also posed a challenge. Fortunately, the volunteers’ work made up for the shortages in this field.

At the beginning of our conversation you said that one of the goals of the project was to find out about further areas of cooperation with your twinned towns. Have you identified any of the potential areas?

Our partner in Ilok has invited the female handball teams of Várpalota and Petrosani to the handball tournament of their town. The project of our former Northern Italian partner town will involve Várpalota and our current partner town Psary as partners. Psary has already indicated its intention to participate in any future international meetings. Cooperation continues with each partner, even though in different fields. This is something I find really motivating. •