Main PageStories and best practicesMore than camping
Europe for citizens 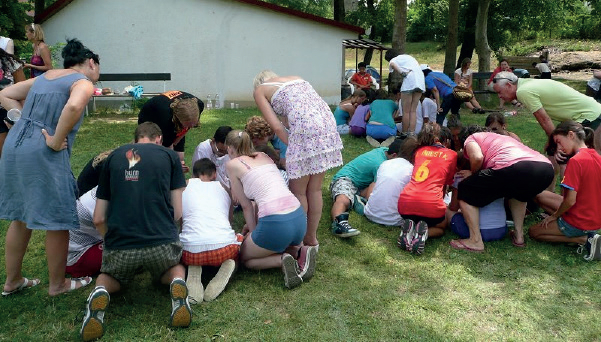 Camping shared the same purpose: to be together and to communicate, to get in touch with and get to know each other. It’s just the same today – only now we can use more consciously the power inherent in international meetings for good purposes. We discussed that with the Head of Communications at the Municipality of Gödöllő in connection with their youth camp implemented under the Europe for Citizens Programme.

The youth camp in Balatonlelle has been the scene of serious, important and memorable events. Just like most of the venues around the Lake Balaton. Here, however, a very special company has gathered every summer for eight years now. There have been Hungarian, Czech, Polish, Finnish, Spanish, moreover, Chinese and Indonesian teens, over a hundred in number. The organiser is the Municipality of the Town Gödöllő, and the goal of the project is to enhance young people’s social responsibility, to involve them in public life and to establish a European online youth platform that supports the exchange of views. “Every year, new children between the ages of 14 and 16 come to the camp. We make sure that there are always children from our twinned towns – Dunajská Streda, Miercurea-Ciuc and Senta -, and beyond that, we seek to rely on all our international relations”, says Director of Communications Csaba L. Péterfi.

NEW WAYS TO GET TO KNOW EACH OTHER

During the one-week camp, the meals, the accommodation and the programmes are provided free of charge to children - they only need to pay for their travel expenses. The official language of the camp is English, although half of the participants usually can speak Hungarian. There’s great need for understanding, too, and not only in a linguistic sense. That is because the project seeks to make use of the very energy and openness inherent in the youth; to use it for building bridges not only between people, but also between countries. To get to know, and of course, to accept cultures which are very different from ours. “It is also very interesting for us organisers to see that whichever part of the world these young people come from, they struggle with more or less the same questions, dilemmas and problems. Here, however, they find novel ways to come to a solution”, explained Csaba L. Péterfi.

When the students arrive, they first of all introduce themselves, their respective countries and home towns. Here comes the first twist then: they get mingled, which means that new teams are formed by drawing - even the leading teachers of the countries are swapped. Each team creates an imaginary country with its own flag, march and rules. And of course, treaties and international organisations are also established, for example, a “youth UN”, to resolve conflicts. Debate culture, lobbying, democracy, compromise, negotiation skills, amicable solutions… there are a lot of things to practice in a playful manner. At the same time, the participants also learn a lot about each other’s real lives unawares. For example, there are controlled exercises, such as learning a song in Polish or Hebrew, and this year they even shot a video clip – the focus was again on acceptance. Inevitably, common history was also brought up. On one occasion, for example, participants from more distant countries didn’t understand why people from Romania speak Hungarian. That provided a good opportunity for the young people to discuss the recent past. Besides, they also learn about each other’s religions and holidays. “Thus, they develop a common thinking while everyone retains their own values, too”, says the Head of Communications of the municipality. “Here they can experience that although we live in different places and speak different languages, in Europe we are all one. We shouldn’t exclude others, but take over from them what is good and build something together. Not only will it not make us poorer, but much richer. At first, even we were surprised to see how much more inclusive these children were than adults generally. And we hope that by the end, they will carry on a positive attitude which they can pass on to others, including once, their children.”

It’s interesting that even though the organisers consciously create doubleedged situations to generate meaningful discussions, over time they also develop naturally and automatically. “It was nice to see when a girl hurt another one and then she was the one who felt bad about it, rather than the one she’d hurt. She couldn’t apologise enough for days and somehow that felt good. It felt good to see that they can reach a point where they understand that hurting each other has a negative effect on everyone. And it’s never too late to say sorry and make things right.”

The duration does not seem very long, but the director thinks it’s just ideal. “In the first days, they get acclimated, from the third day they become relaxed, and by the middle of it, mobile phones disappear completely. We say goodbye to each other when everybody still gets on well with the others and they haven’t become cliquey yet. No wonder that teens often say goodbye crying because they get to like each other so much. It’s an experience for a lifetime for them”, Csaba L. Péterfi adds.

Although upon closing the camp, the winners are announced, each team is a winner here, they say. The outcomes are sometimes quite palpable: many former participants have chosen a diplomatic career or continued their studies abroad. Some even told us that the camp had had great significance in making that decision.

“Adolescence is not the easiest period in one’s life. That’s why it’s all important for them to get as much attention as possible and to be taken seriously. They are not children anymore but not adults yet, either. We adults, however, sometimes tend to forget that once we were teenagers, too. Many people just ignore teens’ opinions, but here in the camp we are curious to know what they think. And this age group can be very grateful for that.”

In order to create synergies, it’s crucial that the outcomes and the experiences can be shared with a broader audience, too. Therefore - and today it’s almost a basic requirement -, everything that can be digitised, whether it’s a report, a photo or a video, gets uploaded to the social media site of the youth camp, as well as to the official website of Gödöllő.

Many of the former campers also keep in touch informally; quite often, they even visit each other the next year. And although there are always new participants, according to Csaba L. Péterfi, not one participant has ever said they wouldn’t want to come the next year again.