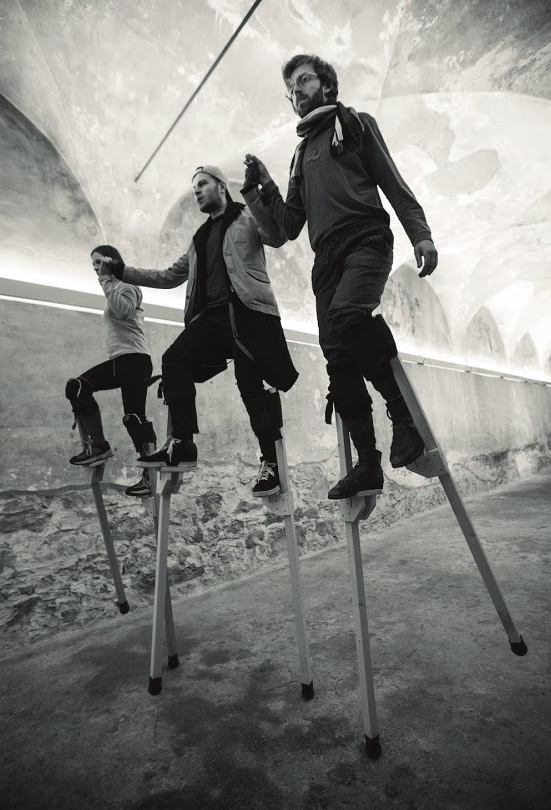 How does street theatre solve conflicts? How does it fight social inequalities effectively? How does it help us lift our gaze? I discussed these questions with Project Coordinator Géza Pintér, a practising street actor and researcher in theatre anthropology. He has worked with theatrical groups in various European countries, so he has experienced the special opportunities that street theatre can offer for adult education, too.

In the one-year-long RIOTE (Rural Inclusive Outdoor Theatre Education) project launched under the Erasmus+ programme, the members of six independent theatrical organisation from five European countries shared and exchanged experiences and knowledge. The Italian and the Slovenian partners come with several decades of experience in street theatre, whereas the Hungarian, Romanian and English participants play a pioneering role in the rural theatrical and cultural lives of their respective countries, mostly in geographically disadvantaged villages and towns.

WHAT IS THE LITTLE PRINCE DOING IN DUNASZEKCSŐ?

The street, the hillside, the churchyard and almost anything can become a stage, and anything can get a role in street theatre, which is part of the so-called participatory or third theatre movement. "Here we all learn from each other, since the well-trained actor and the amateur create something together, and the audience also gets involved in the game, where the actors can not only express their feelings through language, but also through their whole bodies. This enables us to teach or learn a new non-verbal form of communication, which excellently shows how the pedagogy of street theatre can appear in adult education" – says Géza Pintér.

The organisers and the locals together created a performance in Dunaszekcső, which is also the seat of the project coordinator Control Studio Association.

The locals who joined brought along their favourite readings - such as Antoine de Saint-Exupéry's classic and their personal stories and memories about their home villages, and that was how the Little Prince got to the North-Eastern corner of Baranya county" – the coordinator recalls. „Lugio was the Roman name of Dunaszekcső, since it has been an inhabited settlement since Roman times. Locals know and are proud of the historical roots of the village, and that's how it has become a play inspired by local history, in which our little prince goes from planet to planet and learns about the history of the village, from the reign of Roman Emperor Marcus Aurelius through the tragedy of the persecution of Jews during World War II to the current challenges caused by the depopulation of the village."

Besides Dunaszekcső, the citizens of the Hungarian village of 150-200 inhabitants, Kide, Romania, could also gain similar experiences. The performance there even included dances from India.

We call what we have created 'barter', or exchange"– Géza Pintér explains. "The actor students who camped with us gave a performance to the locals, who, 'in return', treated them, told them their own stories and also gave them a taster of their own songs. Thus, in fact, two performances were created, as well as a social event where the roles could be swapped and became traversable, and there was no sign of any foreign feeling."

WHERE EVEN OLD WOUNDS CAN HEAL

It has become clear in a number of cases that in socially disadvantaged areas not only has street culture a culture-creating power, but it may also bring the community's sensitive issues to the surface and provide tools to manage them. If, for example, there's a conflict between the members of the group, the performance may initiate the process of consolidation and mutual forgiveness. It may as well happen in theatrical training sessions, where everybody brings and shares their own personal stories, and therefore former frictions are verbalised and revealed" –the coordinator explained.

Besides, participatory theatre also has a role in moderating the antidemocratic distribution of access to culture and try to step up against its unfair nature.

"This kind of inequality is not only characteristic of Hungary. Due to the experience exchange offered by the RIOTE project, we could closely study the English method which has been fighting for forty years against performing arts being the privilege of the upper middle class living in big cities, for geographical and economic reasons. They perform locally to those who can't get to a theatre, by adapting the performance to the characteristics of the small town or village, and today they successfully connect the towns and villages where the culture of participatory theatre has been established. We also plan to implement it in Hungary, but that already belongs to our latest, currently running RIOTE 2 project."

I'd recommend it to anybody who's interested to learn how to use stilts"– says Géza Pintér, responding to my question what is it that those involved in projects run in a similar environment, even though for other actual purposes, could adapt from the practice of participatory theatre. "They're more sophisticated tools than they appear at first glance; we use them regularly in our performances, too. It's a method which is quick to learn, and it gives you a sense of achievement; also, it improves body-awareness, and therefore increases self-confidence in a number of ways. Its psychological benefit is also considerable; it's like learning to walk once again - of which we as adults don't have any certain and conscious memories, but our body does, and we can wake them up."

However, it's not only the one using stilts who can benefit from it. Studies show that Western people keep their eyes 30 percent under the horizon on average. However, when they meet such a street actor, they immediately raise their eyes, and yes, it has a symbolic meaning: even if for a while, we will keep our heads up.