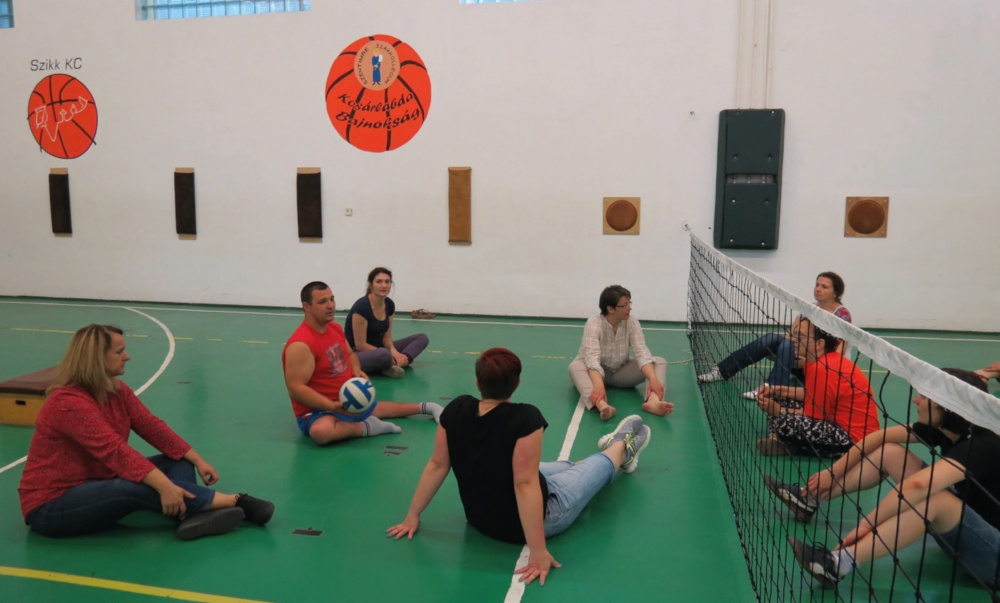 How long and to what extent may man take shape? How open is an adolescent and the adult guiding him or her when development, broadening one's view and acceptance are at stake? Well, the experiences gained in the Erasmus+ project implemented by KatHáz Public Benefit Nonprofit Ltd. definitely send out a positive message in the matter. The organisation is engaged in providing sensitising training courses to teachers within the project, which is not only supposed to reach the teachers, but through them, hundreds of students, too. The goal is to build a more tolerant society through a multigenerational partnership.

A partnership of generations for a more sensitive society

Ensuring a meeting point for various generations is a basic activity for the Catholic House of Szeged, which relied on the experiences of many years' sensitisation work to design the 'ÉrTed!?' (TeachHear) project. That's why the target audience of the project was the secondary school generation, since formerly they'd mostly worked with them. "Our residential sensitising project called "Join Us", first implemented in 2014 with the involvement of 25 secondary school students, addressed young people, among others. During the project, it became clear to us that adolescents' thinking can be shaped through credible examples and role models, and that they're mature enough for more serious issues such as social inclusion" – began Ágnes Bibok, specialist project leader.

However, the organisers found that the considerable changes detected in students could not necessarily become part of their everyday attitude; that gave them the idea to another project. "We found that during the one-week work we managed to sow the seeds of change. Returning to their own environments, however, the students often couldn't realise their ideas or keep up the motivation they'd gained, because they received no encouragement or professional support from their teachers. That's why we wanted to focus on teachers' social sensitivity and openness within the project.”

Besides intention, good methodology is the key

Teachers' role is not only important because of the motivation they can give to already sensitised students, but also because they can address more and more students, since through the education of 25 teachers, 400-500 students of 14 to 18 can be reached every year. As Ágnes Bibok put it: during the development training, they organised two learning events, whereas later they also held a test course, where the teachers clearly demonstrated openness. Teachers, too, consider the issue of sensitisation important and topical, as in the course of their everyday work they can see how much students need the development of the related attitudes and competencies" − the specialist said.

However, the interviewees also mentioned that addressing the issue with the students wasn't easy, for a number of reasons. "On the one hand, teachers so far haven't had any professionally developed methodology to help them effectively present the issue to the target generation. On the other hand, the lack of time and excessive workloads make it harder to realise individual ideas. That's exactly why they received the training very positively, as well as the methodology sessions and the forums where they had a chance to discuss their experiences or established best practices" – Ágnes Bibok emphasised.

The 30-hour accredited teacher training was held in two 15-hour courses, lasting twice one and a half days. The first session focuses on the personal competencies and attitudes of the teachers involved, whereas the second one set the goal of developing the methodological toolkit. The subject matters of the training course were selected according to the experiences of secondary school students in the Southern Great Plain region, and therefore the curriculum included exclusion, tolerance, disabilities, deep poverty, the Romani people, as well as family issues.

"In the project, we primarily put the emphasis on non-formal methods, and therefore training methods, community learning, learning by doing and reflective methods dominated. Besides, at various points of the programme the sensitisation cartoons called 'Ferdo and Frank", produced by our Slovenian partner, Socialna Akademija, also played a particularly important role. The six animations addressed the issues of social consciousness, social inclusion and participation, volunteering, civil society and social media. The cartoons are available on YouTube. It was essential for us that they were readily available, as they provided a basis for addressing the above-mentioned issues and for inducing important dialogues"– Ágnes Bibok recalls.

The above-mentioned six cartoons were part of the ten intellectual products which those working on the project dreamt up and prepared within the Erasmus+ project. During the first phase of the project, a very important questionnaire survey was conducted with the involvement of 850 secondary school students, seeking to specify the potential problems of the region from the perspective of social science and sociology. Finally, the information provided by secondary school students from Szeged, Timisoara and Komárom was used to prepare a document called Situation Analysis as well as a Problem Catalogue, which, as a closing to the preparatory phase, highlights the key breaking points. Its counterpart, the Solution Catalogue, was written in a later phase of the project, and it summarises the most important outcomes and ideas.

"Another important and tangible product of the project is the 'Trainer's Handbook - The Theory and Practice of Sensitisation Training Courses', prepared under the guidance of the Akademie Klausenhof adult education centre, Germany. Besides the collection of 60 exercises, we also published a book, the Methodology Aid, supposed to supplement our training courses. It is a summary of our teacher training course called 'Mi(egy)Más'; it is distributed among the participants and it's full of methodological ideas, curricular and extracurricular sensitisation programme opportunities"– added the associate of the Catholic House.

"Since the internationalisation of the training programme developed was among our goals, we also published the training curriculum in the national languages of the project partners (in Slovak, Romanian, German and French), so it can be adapted and used as widely as possible. The Slovenian and the German organisations have even expressed their willingness to launch the training course"– said Barnabás Gergely, Financial Manager of the Catholic House, adding that they definitely plan to follow up the project in the future.

Currently, however, the most important goal is to organise the developed and accredited training course as frequently as possible. A number of teachers in Szeged, as well as the entire teaching staff of a school in Timisoara, have already applied to attend the sensitisation session.

"We would very much like to make the training programme available and well-known to the secondary school teachers of the Southern Great Plain region, as well as to promote it nationally among the representatives of the teaching profession"– said the Financial Manager.