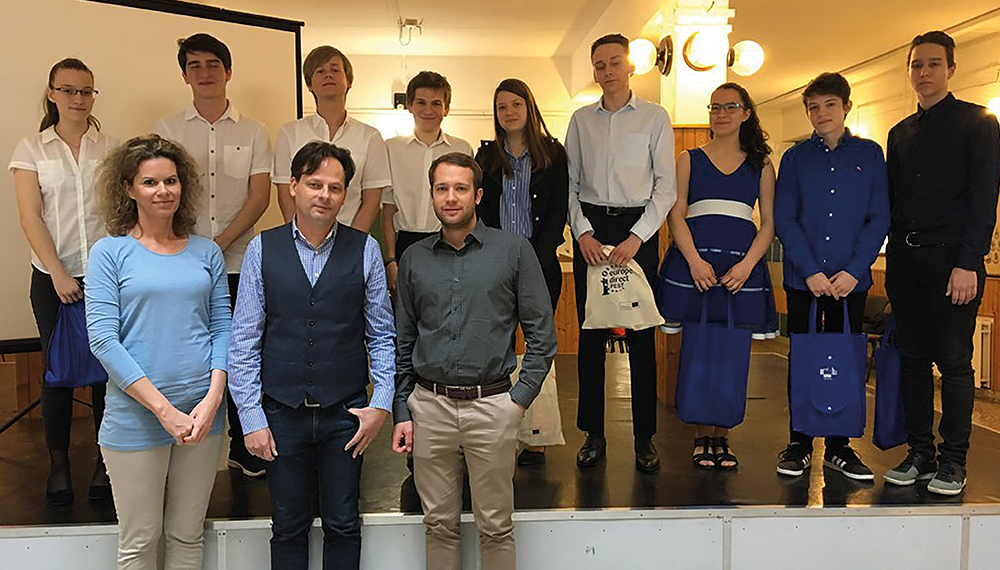 The Municipality of Pest County implemented the iDebate - I Debate, Therefore I Learn project in cooperation with six international partners, with a view to encourage youth’s social engagement and involvement in public life. The local events proved that the children had a lot of ideas on how to increase the activity of their generation. The online iDebate forum developed during the project is updated on an ongoing basis, and the number of forum users and followers is still increasing. We talked to Áron Dorka, Programme Officer of the Municipality of Pest County.

What was the primary goal of the I Debate, Therefore I Learn programme?

We wanted to increase youths’ involvement in public life as much as possible, and to get them involved in politics to encourage youth participation in the European Parliament elections. The project was closed in January 2019, shortly before the elections.

Who was the project initiator and who were the international partners?

The leading partner was the Student Plus youth organisation of Timisoara, mostly engaged in youth and volunteer programmes. Similarly to the Municipality of Pest County, they operate a Europe Direct office, too. It is the communication and information network of the European Commission, providing customer service and answering EU related questions. An important element of our activity is organising youth and school programmes, such as EU classes and competitions, as well as a road show, visiting major events with an EU pavilion. Within the Europe Direct network, we often meet foreign colleagues at various training sessions; it was during one of these sessions, when discussing the Brexit referendum, the issue came up that most of the British youths who would have decided to remain in the EU didn’t even go to vote and stayed at home instead. And, unfortunately, it also applies to other referendums within the EU that youth participation rate is very low. We began to think together, and that is how the idea of the project was born, which, however, was not implemented within the Europe Direct network. We soon found the Europe for Citizens programme, aimed specifically at increasing social engagement and spreading the European idea. Our international partners were a Slovenian, a Serbian, an Italian and a Croatian youth organisation, as well as the University of Lisbon, its School of Social and Political Sciences, and the School’s college for advanced students.

How did you manage to get young people involved in the project?

Our idea was to ask them about how they could be mobilised. Each partner organised five local events, mostly in schools. In Hungary, two schools from Cegléd, one from Érd, one from Ráckeve and one from Gödöllő participated in the programme. Similarly to debate competitions, we used the methodology of ‘case solving’. We wanted to involve as many students of the schools in the programme as possible, so first they were given a case available online, which they could solve in about fifteen minutes. It basically led them through the difficulties and opportunities of choosing a career by means of a story embedded in an animated video. In this case, one of the options was continuing studies in another EU country, an exchange programme or volunteering. At each venue, three teams were formed from those who solved this task. Then they were given a case study related to citizen engagement, which we compiled in cooperation with experts from the European Commission and the European Parliament. This helped their preparation, and the three teams debated with each other at local school events. They needed to present their ideas to other students and a jury, and a local winner was chosen at each venue. Besides, the project also had four international events, attended by youths from the other partner countries, too.

What were the topics discussed at the events?

We, organisers determined the main topic at the beginning of the project, and it was ‘means of digital engagement in modern democracy’, with special emphasis on how youths could be involved in public life through social media and the Internet in general. The closing event specifically focused on the European Parliament elections. Other topics at the local events typically included volunteering and sustainable development - it always depends on the local partner ‘what’s in the air’ over there and what topics are worth discussing.

How did the international events go?

The events had a section when the participants sent by the partners talked to the students about their own respective countries and young people’s situation there, as well as about the solutions brought up during the local events. Attended mostly by university students and university teachers, the event in Lisbon was an odd one out to some extent, so it was an event of a more theoretical and analytical nature.

What did you find out about the reasons young people don’t actively participate in public life?

Children spend a considerable part of their lives online, in social media, and they basically can’t understand why you can’t vote over the Internet. They are aware that this may have security risks, but they still find it weird to have to go somewhere and use a pen to check boxes. The lesson drawn is that young people could best join public life and debates via tools and means, which are ‘handy’ for them. At our events, we asked them to use actual case studies to develop proposals for solutions to how to engage their generation better. Their proposals included many online, technological and social media tools. It was also suggested that elections should be conducted in the form of some ‘democracy festival’, where the participants spend days focusing on this subject, and the climax would be the voting itself.

These debates and competitions are typically not part of the Hungarian school system. How strange do you think students found it?

They didn’t approach it like a usual academic competition or school project, but more like having fun. At the events, they listened to the presentations of their own fellow students, and there wasn’t a single teacher among the presenters. It was mostly the teachers who found this thing very new and unusual. The members of the teams of three were chosen automatically, based on the solutions of the first, online case study. Thus, the teams didn’t necessarily consist of students whom the teachers would have expected or ones who had formerly regularly participated in school competitions.

What can be the afterlife of the project, and how can you benefit from its outcomes?

The online platform and social media site created during the project is still active, updated on an ongoing basis, and the number of forum users and followers is still increasing. The ideas, proposals and comments, which arose during the iDebate sessions, provide help to our work, primarily when planning youth programmes. The most important aspect, which we benefit from - besides the use of online and social media tools - is encouraging students to become actively involved partners in our programmes, who can continuously shape the programme and share their ideas and opinions.