Main PageStories and best practicesWHAT HAD THE REGION GAINED WITH THE EU ACCESSION? - For the new generation, joint Europe is the everyday reality
Europe for citizens 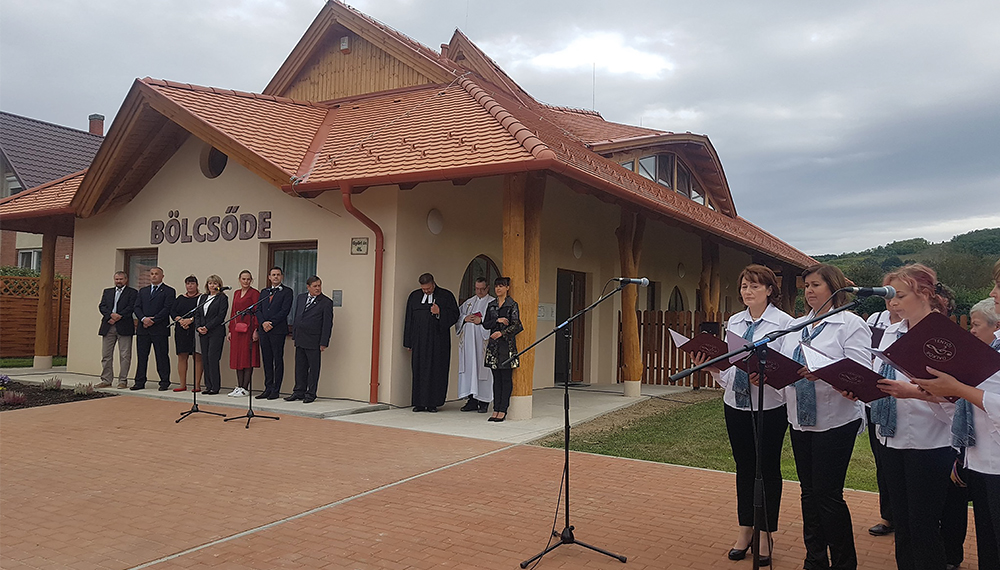 Under the Whither Europe? project, representatives from twinned towns of four countries met and sat down to talk, exchange experiences and celebrate the anniversary of EU accession together. I spoke to Gábor Varga, Mayor of Tényő, the host village of the three-day meeting.

WHAT HAD THE REGION GAINED WITH THE EU ACCESSION?

For the new generation, joint Europe is the everyday reality

You have just returned from your twinned town in Slovakia, Malé Dvorníky. What was the purpose of your visit?

We are currently applying with two projects; this time our goal is to install pavers in the village centre and to restore the urn wall and the gate of the cemetery. So the common work did not end with closing the summer twinned town meeting; what’s more, it also goes back much earlier than that. We have been sharing our cultural treasures with each other for ten years; so, for example, Malé Dvorníky invites our choral society to each festivity, we commemorated 15 March together, and we are always there on village days and at Pentecost, as well as at the choir meetings held in the Slovakian village. In addition, many friendships were made between our pensioners’ clubs and the teaching staff of the two schools. We had formerly applied with common projects in the past, too; it’s due to that, for example, that our Mayor’s office buildings use environmentally friendly energy, that is, solar panels. All this was also implemented through an EU project.

Why is it so important for such a small town as Tényő to position itself not only within its own region, but also on the horizon of neighbouring countries, moreover, the whole of Europe?

For fifteen years, since Hungary’s EU accession, some kind of EU sources have contributed to most of the developments in Tényő, such as the establishment of our new community centre, our Makovecz style kindergarten or our nursery school to be opened on 1 December. However, Europeanness is also palpably present in the everyday lives of the families of Tényő, since Austria is only sixty kilometres away from us, so as the borders and the strict and restrictive rules vanished, job opportunities in Austria, as well as shopping and cultural events became available to us. Exactly because of this fortunate geographical situation, those living in Tényő but working in Austria are not forced to leave their families and home village, either, as they can come home on a daily or weekly basis. What’s more, during the past thirteen years, since I was trusted by the village to become Mayor, the population of our village has increased from 1,400 to 1,800. I am definitely proud of the fact that we, here in the heart of the Sokoró hills, have become this attractive to those seeking a new home. Of course, besides Austria, it is also due to the job opportunities offered by the nearby city of Győr, and that is why we decided to establish a nursery school to support families with little children.

The head of a municipality could hardly be effectively committed to the European values without support from his or her community...

That is absolutely true. But Tényő has, if I may put it so, a history of maintaining and protecting European traditions and relations, besides local ones. A heart-warming example of that is that the cantor from Hannover, who served in our parish in the seventies, returns to visit us every year ever since he stopped being our organist, because of his nice memories of the years he spent in Tényő, he says. And there are also other expatriates from Tényő who regularly come home for a visit, even from Australia. It is always a pleasure when after their holiday they send us letters and photos, recalling the times spent here with us. Our NGO’s still keep up these traditions, our pensioners’ club as well as our sports associations - consisting not only of young people -, and our choral society particularly stands out in this respect, as music can overcome linguistic challenges and create communities both within and outside the borders. And here, among our values, we should also highlight our row of wine cellars, since, as part of the internationally recognised Pannonhalma wine region, we are proud of our wine culture, which we also proudly presented to our guests at the town twinning meeting, along with our other cultural and natural values.

Why did you consider it important to be hosts of the Whither Europe? project?

It was attractive that the Slovakian, Romanian and Austrian twinned towns were also invited to the meeting, which allowed a really varied and useful opportunity to exchange experiences. The event was implemented successfully, and during the professional part of the meeting, the mayors involved could as well exchange views. Such an occasion was, for example, the round-table talk, focusing on how the region has so far benefited from the EU accession, but the challenges to be faced were also discussed. The debate was coordinated by Zoltán Pogátsa economist, university professor. The participants discussed how the opportunities of the Member States within and still outside the Eurozone differed, and where they needed to think differently. The Slovakian mayors, for example, having introduced the euro, reported a stable economic environment, which we, Hungarian mayors, see very differently, of course. We are very sensitive to currency rate changes; it is much harder, for example, to plan the budget of an EU project, particularly when it is a transnational project, and one partner thinks in terms of euro whereas the other in a national currency. So we agreed that the difference was not only discernible at the macroeconomic level of our countries, but also at the level of municipalities, depending on whether we pay in euro or not.

160 of the participants came to the meeting from the twinned towns in neighbouring countries. How did you manage to get them involved in the three-day programme series?

We prepared with events for them and the residents of Tényő, and even the residents of nearby villages. We commemorated the 15th anniversary of the EU accession together. The village day, the dinner consisting of local dishes and our traditional folk programme provided a great opportunity to mingle and get to know each other. We also organised a drawing contest for students. It was thought-provoking for us adults to see how children today answer the question that was also the title of the contest: ‘What does it mean to you to be a European?’ Just like my own grandchildren, they also made it apparent to me that for this generation, a shared Europe without borders is not an abstract notion any more but everyday reality. The most imaginative works were rewarded at an award ceremony, which, as the children told us later, was a lifetime experience for them.

For you, personally, what was the most outstanding experience during the project?

It was definitely being together, the sense of belonging together, and being able to spend an entire three days even with those who represented more distant twinned towns and whom, therefore, we meet less frequently. With many of them, we have a long-standing friendship. And it’s a special pleasure that Mădăraș in Romania is now not only our twinned town, but also that of Malé Dvorníky, Slovakia, which makes the partnership even closer. I am proud that I was the initiator of the friendship between the two towns, and that I could also witness their first common steps. We support each other in whatever we can, as we know who has greater experience in what, whether it is writing a project application or organising a large-scale commemorative event. These are true, living connections, which are important to us, and not obligatory items in the documentation of our municipalities, waiting to be checked.