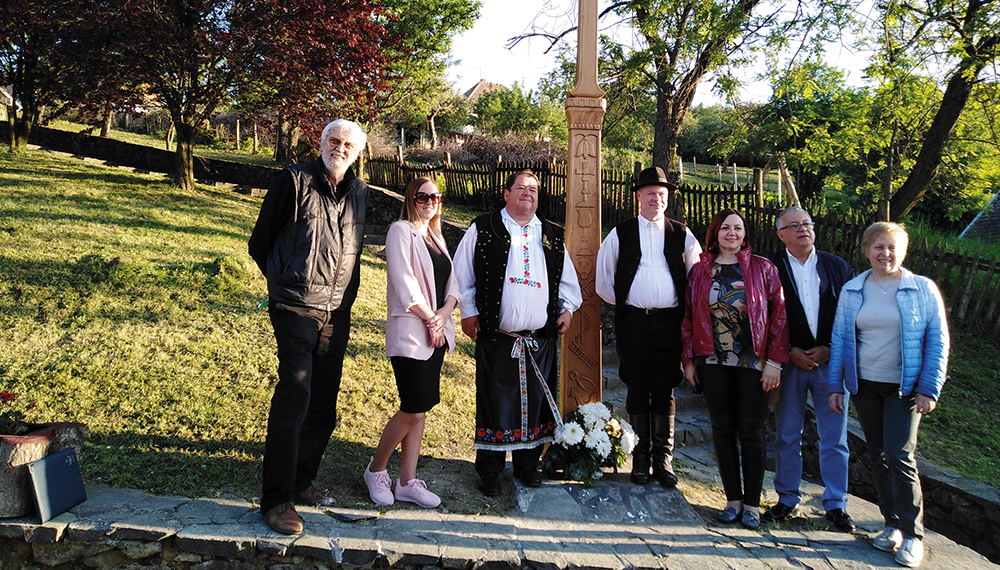 In spring 2019, participants from five countries visited Hollókő to share with each other what it means to them to be a European citizen. The project called To Inherit Our Heritage allowed participants to talk openly about doubts, challenges, and opportunities of conserving our common and diverse European values. I asked Csaba Szabó, Mayor of Hollókő about the experiences gained at the town twinning meeting.

FROM EUROSCEPTICISM TO OUR JOINT EUROPEAN TREASURES

The meeting was held two weeks before the 2019 European Parliament elections. Was it exactly why or despite this that you decided to focus on the issue of Euroscepticism right on the first day?

Indeed, it provided special relevance to the event that around that time each participating country was busy preparing for the MEP elections. There were heated arguments about who had what aversions to EU institutions, the way they functioned and their decision-making processes, as well as what these aversions may stem from. I think it is natural that very different aspects and opinions emerged during the discourse, as we came to the meeting from European regions of very diverse pasts, cultures, and levels of development, which greatly influenced our points of view. What we agreed on, however, was that the current functioning of the EU was far too bureaucratic, and one of its very consequences for us, citizens, was that it was not clear at all what was actually going on in Brussels and Strasbourg. We did not avoid such sensitive and topical issues as migration, either, and both opinions supporting migration and ones opposing uncontrolled migration were discussed. For me, it was very eye-opening to see that this diversity didn’t increase the gap between us; on the contrary, it inspired us to get to know each other, and thus we experienced how empathy and tolerance grew between us when we listened to and tried to understand each other’s arguments.

Hollókő is part of the World Heritage. This heritage carries a weight. What did you consider important to share with the representatives of the towns involved about it?

The meeting was very varied in this respect, too, since we had participants from twinned towns already listed among World Heritage sites, in Italy, for example, as well as from ones just about to become one, such as Rimetea, Romania. I always say that we must protect and conserve our traditions and cultural and natural values even if they are not parts of the World Heritage. Thus, each twinned town held slide presentations to show what they were proud of, what they had inherited and wished to bequeath, and we regarded these things as our common European treasures to be conserved. In fact, it was also a great opportunity to talk about experiences such as what it meant to be the mayor of a village with a World Heritage title, not disregarding the fact that it carries a greater responsibility and more duties. Meanwhile, of course, we also enjoy the benefits of it, since a village like that receives more attention and can become a domestic and international tourist destination. However, it also has less apparent benefits than the development of tourism, such as the fact that our social events can build a bridge between various generations through common leisure activities.

Surely, this is something any mayor would agree with in theory, but the practical implementation is not that easy. How can you organise programmes that the members of both younger and older generations will find attractive?

This meeting itself was such an event; the older residents of Hollókő could realise during these days that our town twinning relations does not only exist in photos - they are very active connections. That weekend, we also inaugurated the old-new crucifix of the village. We managed to get our older residents involved, too, and address them with the message this event conveyed. There used to be a crucifix under the Castle of Hollókő for a long time, right until World War II, but it disappeared without a trace during the cataclysm. Since it was also of artistic value, its disappearance was not only a loss for believers, but also for the entire community. Once someone made a drawing of it, so we had an image to start from after more than seventy years, when we decided to rebuild it. The implementation was a real town twinning partnership. Our Székely friends undertook to carve the crucifix, and the choir of our Italian guests sang at the inauguration. And since the ceremony was ecumenical, attended by members of the Catholic, the Reformed, as well as the Unitarian church, it was also a nice example of the peacefulcoexistence of religions for young people, which is a topical issue all over Europe, anyway, affecting not only Christians. Ever since then, there have been fresh flowers at the base of the crucifix, and the residents of the village have considered it their own since the first moment.

That’s right, and we seek cooperation, too, even in everyday issues, since our problems and challenges are very similar. Nevertheless, the mayors of the neighbouring villages were also involved in the professional programmes of the town twinning meeting, and their citizens presented their traditions and gastronomic specialities at the Hollókő Picnic. Similarly to our foreign guests, everybody brought or cooked something so we could taste and learn about each other’s cuisines. We also had some surprising culinary discoveries, for example, when we faced with the fact that Italian cuisine serves greasy bread with honey; we love both, but prefer to eat them separately... And there was an Italian lady who pointed out how close Slovakian and Hungarian languages are to each other when she heard us speak to our friends from Southern Slovakia. So we instantly took a map and held an impromptu history class about how it happened that, although we lived in different countries, we speak the same language. This way, we learnt about each other’s national pasts and cultures in an informal manner. We wanted to learn as much as possible, so we also organised a day trip to Gyöngyös, so we could also present urban environment and urban social life within the region.

The summer town twinning meeting also served as a youth meeting. In the region, many towns and villages have diffi culty retaining and keeping youth at home. How can Hollókő cope with this challenge?

There are more young people in the village now than there used to be, more of them choose to stay, and we also have families moving in. Interestingly, it is our very traditions that help us make the home village attractive for young people. First and foremost, it’s our folk dance group that creates a community locally, but it also brings Europe closer, as their performances attract visitors from all around the world, and due to their good reputation, they also receive a lot of invitations from other countries. I saw what a great experience it meant to my sixteen-year-old daughter, too, to travel to a meeting held in Italy with our youth dance group; it was a real team- building trip for the children of Hollókő, and during the two weeks spent there, lots of international friendships were made. But we also need to know that we, members of the adult generation, are still learning, too, what it means to be a European citizen, while it is also our responsibility to set an example in that. That is exactly why on the fi nal day of the town twinning meeting we let our young participants speak and we concentrated on their voices. Their message was clear; they want a chance to be involved in building a shared and diverse Europe, at a municipal level as well as through international activities.