Main PageStories and best practicesInstead of feeling pity, regard youths with disabilities as partners
Erasmus+ 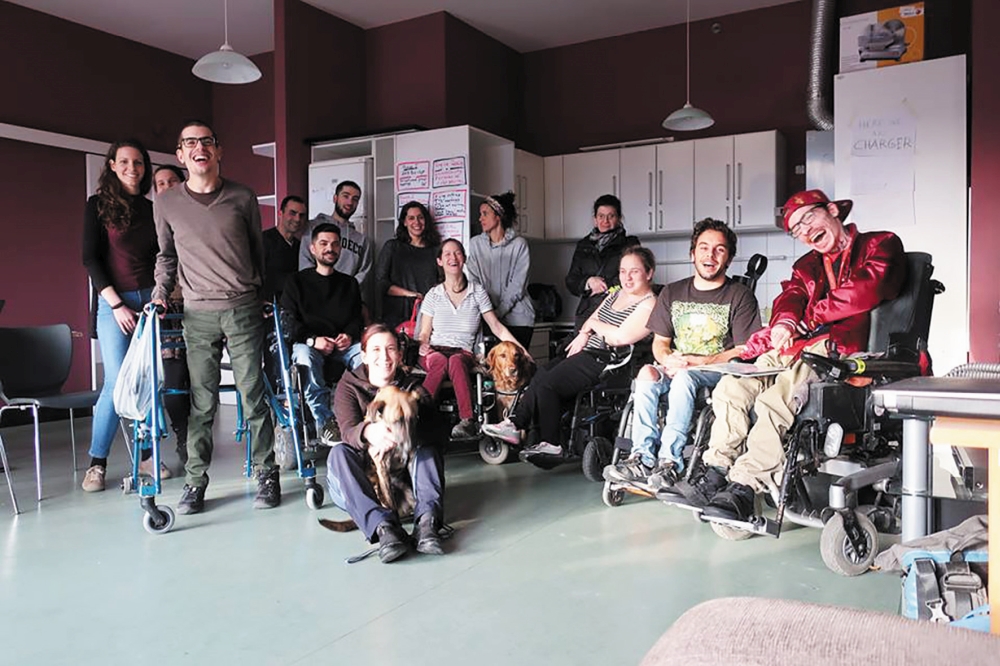 In 2010, a group of young people decided to do something for their own generation. With community building and solidarity in mind, they established 'Együttható' Association, whose Erasmus+ youth project called Here We Are won a Eurodesk Award in Brussels this year.

Instead of feeling pity, regard youths with disabilities as partners

The annual award of the Eurodesk network has been awarded to partner organisations in recognition of their key activities since 2011. The award seeks to present the most innovative, most effective and most relevant projects to the institutions of the European Union and other youth organisations. This year, 44 applications from 17 countries were received, out of which the jury chose the project of 'Együttható' Association, Hungary, called Here We Are, as the best one in the category Solidarity Actions.The Association has won the recognition for the second time, as their Erasmus+ project Breaking stereotypes was also an award-winner in the same category in 2017.

The projects awarded in this category focus on youths who are in need of some help and guidance about their rights and opportunities. Under the Here We Are project, they worked on the social inclusion of people with disabilities in Hungary and Portugal. In this youth initiative, they offered help to informal groups in organising events and campaigns - in schools, community spaces, universities, shopping centres, production companies and festivals. In 18 months, they implemented 12 activities focusing on the lives of youths with disabilities, such as a wheelchair flash mob, an alternative fashion show and sensitisation at schools. Due to the partnership, the competences of the youths involved have improved and their self-confidence has increased.

We talked to Elemér Szentpétery, Chairman of 'Együttható' Association, and group member Péter Szász, about the award.

Where did the idea of establishing 'Együttható' Association come from?

In fact, the Association started as a company of friends, consisting of people working mainly in humanities. The goal was to organise social events where young people can fit in despite all their differences, and they can learn from each other and about the world, so they can become something more and succeed better.

Why do you lay the emphasis on addressing the young generation?

When we founded the Association, we were young people ourselves, so we could see what it was that the traditional school system couldn't necessarily provide to us: there's not enough emphasis on soft skills and not enough time to experience team work. There's a basic lack of diversity, and that's what we wanted to give an alternative to, in a more informal way.

How can the Association help with that?

Our motto is 'Community is a value'. When somebody belongs to a community, they can share their problems there, which can be a great help. Also, it's much better to learn about the world together, by exchanging views. Almost all of our initiatives focus on creating micro communities, which can as well live on later even without the project. The other cornerstone is non-formal education and learning from each other.

'Együttható' Association has implemented a number of international programmes. Can you highlight one which you are the proudest of?

I'll tell you two. One is basically a series of exchange programmes called Breaking Stereotypes. Young people with disabilities encounter a lot of stereotypes concerning their abilities, and our goal was to dispel those. The predecessor of the programme was targeted solely at Hungarian youths, so we had a basis for comparison to see what could present added value in the international implementation. The other one is a training course, implemented for the third time now, for social and educational professionals. Here, we mostly focus on peer supervision.

Let's talk about the 'Here We Are' team a little.

The team mainly consists of wheelchair users, and their work is closely related to the above-mentioned series of exchange programmes. It has an important function to ensure visibility to young people with disabilities, and demonstrate that they are valuable people. The goal, therefore, is to make the majority society regard young people with disabilities as partners, instead of feeling pity. We are talking about hundreds of thousands who are concerned, and still, their voices are not heard within the society.

The team has worked for almost three years now, and the Eurodesk network awarded the work done in the first eighteen months. It's a great recognition, because it confirms that what the team does is important. At the same time, it also shows that there are still very few initiatives which actively involve young people with disabilities. Otherwise, it would be nothing special: a group of young people collaborate and create things. Just remove the expression 'with disabilities', and it's not so uncommon any more.

What does the 'Here We Are' team mean to you?

For me, this whole thing is like social activism. I think it's important to demonstrate that people with disabilities, too, have the same qualities as healthy people. We can be interesting or good company, too. It's like talking about a car which is a little road-worn with some problems, but still running.

How do you manage foreign exchange programmes?

We mostly organise project meetings, but we also go sightseeing sometimes. We have been to Portugal twice, and we're preparing for our third visit. I like travelling; that was also one of the reasons why I joined, as the team provides great opportunities to do it. We have done lots of things so far, from organising escape rooms to flashmobs and solving puzzles. On one occasion, we held a presentation in a shopping centre with a team member's assistance dog. You should think along those lines.

What is it that you are proudest of?

It's definitely our common work. It's nice that we don't have arguments and we can cooperate smoothly and effectively. As for myself, it may be the fact that I'm more self-confident when communicating with foreigners, and it's not a problem to use a foreign language. I think you can improve a lot during such a trip.

This year it was you who represented the team and received the award of the Eurodesk network. What does this recognition mean to you?

The award is given to projects which do a lot for equal opportunities and for moving the world in a positive direction. Commonplace as it may sound, but I can still hardly believe that it has really happened. I'm very grateful that this task was assigned to me. I see this team as being absolutely purposeful, and it's nice to see that we're not just resting on our laurels, but we really do something meaningful. I think only few people do that today.