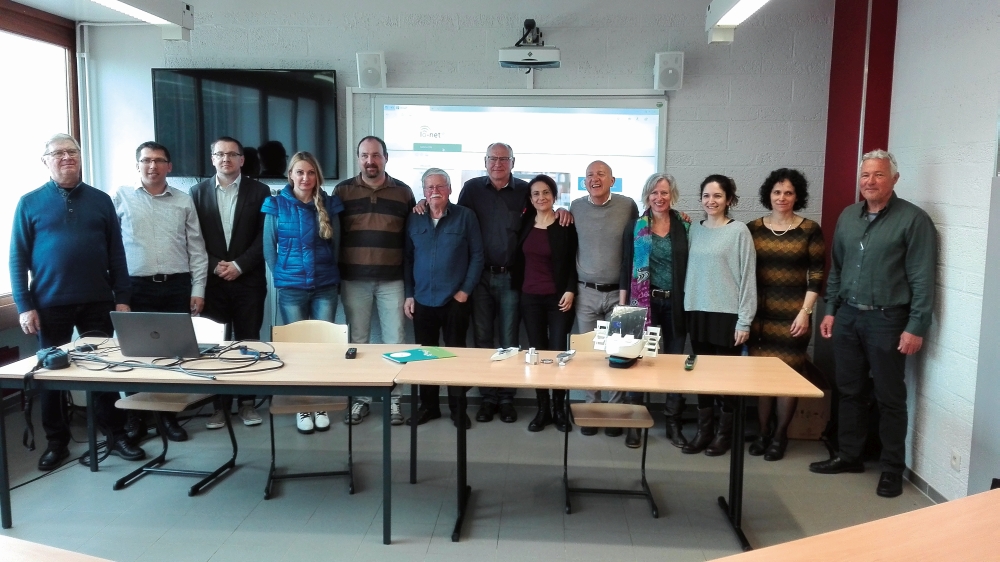 The students of Bánki Donát Secondary Grammar School of the Vocational Training Centre of Dunaújváros are building a solar-powered boat. The project did not only focus on developing students' skills and language proficiency, but also on reducing our ecological footprint.

Environmental protection has never been more relevant and important than today. It's a burning question - literally, unfortunately, as when this article is written, Amazonia has been in flames for weeks - how much attention we pay to our planet and how much we do for a change at an individual level.

The Sonne über Europe, that is, Sunshine over Europe project has set its focus on this very issue: the students of Bánki Donát Secondary Grammar School of the Vocational Training Centre of Dunaújvárosget a first-hand experience, even before their final exam, of what it's like to be involved in a process which begins with everyday, committed work and extra-curricular sessions, but then becomes part of something much bigger and more important done for our planet.

But let's not get ahead of ourselves, let's begin at the beginning! At the 2016 United Nations Climate Change Conference in Morocco, the political decision-makers expressed that they expected citizens to be actively involved in environmental protection. Bánki Donát Secondary Grammar School of the Vocational Training Centre of Dunaújváros has been involved in Erasmus+ Strategic Partnerships projects for years, so they were clearly not beginners when the launched the project called Sunshine over Europe, aiming to build a solar-powered boat in cooperation with their European partner schools. It's a fact, however, that the implementation, that is, building the boat, presented lots of new challenges.

In the three-year project six schools - from Belgium, Germany, Poland, Turkey, Hungary and Italy - collaborate by presenting at the semi-annual project meetings what they have completed so far. At the beginning of the project, the school recruited the engineer and IT students who wished to join at a forum. These students formed a team of 10-15 to work together on the boat. Besides each country making their own model solar-powered boat, the partner countries also distributed work.The design phase was allocated to Hungary; they used a 3D printer to create a programmable robot unit, as long as an A4 sheet and about 30 cm high.Of course, school's IT-proficient teachers also helped the students, who could thus instantly see the actual results of their studies and programming. The students also defined the material related to the solar panels, of which they also gave a presentation. The model built by the institution is at its final stage, the prototype can be seen at the school, and the students often present it at exhibitions, too. The original hull, still under construction, is in Germany; after the project, it will enter a race, so by that time the masterpiece must definitely float.

The project team consists of 16-17-year-old Hungarian youths, who work on the boat as an extracurricular activity. Generally, this activity doesn't require more than one or two hours weekly, still, the students take the duties very seriously, the roles of which have been defined since the beginning of the work, so they require great responsibility. During the team work, the students teach each other and develop together, as common thinking, planning and travelling brings them together. Moreover, their parents have also been very supportive since the very beginning, and the school's teachers stand by the students like real mentors and accompany them to foreign project meetings.

The Hungarian team will send a core team of 2-3 students to the international meetings held in spring and in autumn, where they will give an account of the experiences of and the work done in the past few months. Besides professional expertise, the several-day project meetings also allow a focus on culture and language skills; the participants compile a specialised dictionary, visit factories (last time they visited a solar panel factory), participate in cultural programmes organised by their host countries, hold meetings and presentations, and in their leisure time, they play football or organise common programmes. The staff of the institution pay special attention to making sure that the students travel in rotation, and that disadvantaged students are also given an opportunity to give an account of their experiences in an international environment.

As 2020, the last year of the project is approaching, next year meetings will multiply, and the teams will also gather for the project-closing competition, where it will turn out how the solar-powered boat performs on water.

The key to success

The key to the success of the Sunshine over Europe project is that it connects learning, skills development and professional experience with the excitement of international project meetings, language practice and learning about other cultures and students from other countries. Meanwhile, it also gives students commitment to such a highly important issue as environmental protection. Then, when they finish their studies and choose a profession and a job, they can face the new challenge girded with practice, a sense of achievement, international experience and relations, and in the knowledge that they have, at an individual level, already done something for the protection of their environment. And not just in a trivial way: they have built a solar-powered boat.

Since it was not the first time that Bánki Donát Secondary Grammar School of the Vocational Training Centre of Dunaújváros had been involved in Erasmus+ Strategic Partnerships projects, they shared their experiences gained during the past years and projects with those who are just planning to join a project as a partner:

You should always keep the children's interests in mind, so that they can feel that the work they invest pays off, and there's a point in learning, whether it's foreign languages or maths. They can gain practice and professional experience even before their final exam.