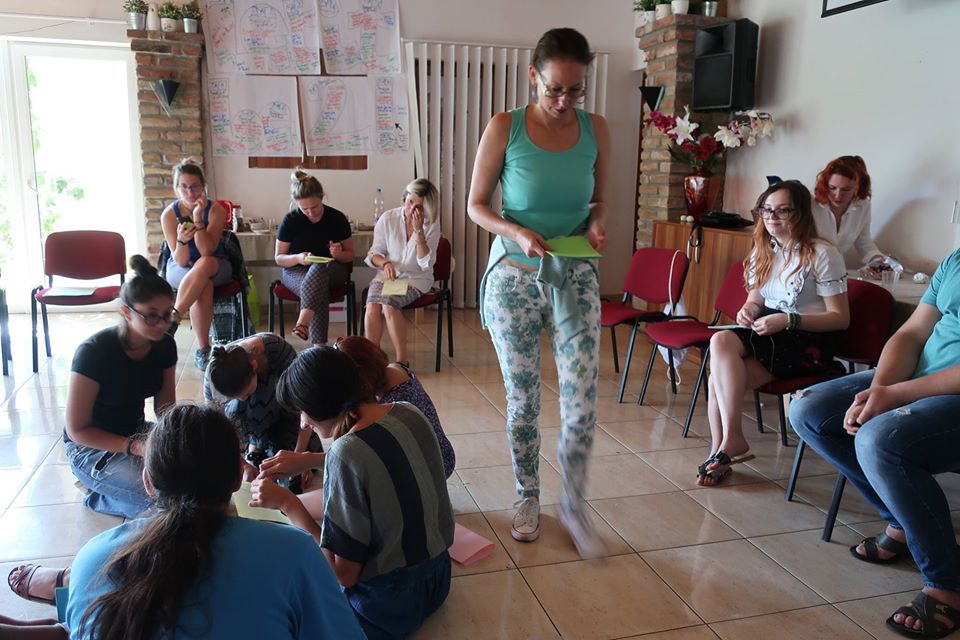 It's not enough that youngsters are OK - it's also important that those who deal with them can cope with the burdens. This is the issue addressed by an alternative professional self-development method, whose spread in Hungary was greatly helped by the Erasmus+ project of 'Együttható' Association.

Burnout. We all know the word, and mostly use it in connection with those working in the health and social sectors, although company leaders working in business may also be affected. Anybody who is exposed to hard mental and psychological pressure in their work can be affected. We could assume that those who spend their days among young people are not at risk. But adolescence is a very vulnerable and psychologically stressful period, and this stress also affects the youth professionals working with this age group.

Supervision is a technique which helps reduce stress in the workplace and the psychological burdens characteristic of human services professions, and thus prevent burnout, also known as a diagnose for some years now. The way it works is that it provides a forum to the affected colleagues to talk about their problems, work-related dilemmas or actual case management questions - with the support of an external and rational person or group, representing an objective point of view.

It's a great tool; however, it's not available to anyone who needs it. It's because, on the one hand, it hasn't been established in every field; on the other hand, it can have considerable expenses. This is the issue which an updated version of the genre, peer supervision, offers a solution to, which may be new even to those who are otherwise familiar with the basic concept.

Like every good idea, it's also based on a very simple concept - forget external help, let's become our own helpers. It means that when you can't get an external professional to conduct supervision from time to time in an organisation, then the members of the internal staff can also create an environment of trust which is suitable for easing the tension, clarifying important issues and resolving contradictions.

Already experienced in the social and educational fields, 'Együttható' Association set the goal in its Erasmus+ training called Let it be vol. 2 - Shared Wisdom to show and teach this method to as many affected as possible, thus improving the quality of the youth work conducted in each partner country and developing the personalities and skills of the professionals working there.

"Actually, peer supervision is a structured form of case study and dialogue, only without a leader", explains Project Coordinator Elemér Szentpétery. "Each group member is equal, and they change roles (moderator, case presenter, secretary, consultants). They formulate a key question to which they seek an answer within a given timeframe. The tool can be a moderated discussion or even free brainstorming. Its advantage is that it's easy to learn and can be used without any external resources, although there is a version when it's used between organisations - thus bringing in new perspectives."

How does it work in practice?

Well, the project was supported by the Erasmus+ programme and it involved the representatives of youth organisations (peer helpers, psychologists, mentors, animators) from nine countries. The eleven-day training course was based on three elements: open workshops, group supervisions and reflective groups. "Our primary goal was two-fold: to raise a need for a dialogue in professionals, as well as to call the attention the phenomenon of burnout. Besides, the participants could understand group dynamics and the importance of transferring responsibility through experiential learning."

In the first round, they contacted their former foreign partners and got positive reception. Specifying the framework wasn't easy, as Elemér and his colleagues found that the body of knowledge and the use of concepts differed in Eastern and Western Europe; moreover, in some places even the concept of supervision was new. Also, this project covers a number of professions. "We decided not to jump straight into it. Before we introduce peer supervision in the training, during the first five days we try to establish group trust, create the self-reflective spaces and develop the right attitudes and group culture.

During the project, they were faced with other challenges, too. Since it's been an annually repeating training course since 2017, it provided them an opportunity to tweak the details flexibly - a process to which the participants themselves could contribute, too. "We considered this project as some sort of island, so we always organise it somewhere far from civilisation. Thus, the participants can only concentrate on their professional self-knowledge without any pressure."

What happens during such an eleven-day programme?

We have, for example, reflective group sessions to improve self-knowledge and reflective skills. The participants could reflect on their daily presence and current topics through controlled questions and moderated talks. "We encouraged them to observe their own feelings and inner happenings, and put them into words, as well as to give and receive peer feedback", Elemér Szentpétery explains.

A main axis of the programme was the workshops with fixed topics - the participants needed to address these topics using their own tools It provided an opportunity of testing, experience exchange and improving self-knowledge in a different context. "They needed to process situations given by the facilitators in groups: how would they act? What is their task in the given situation? Or, as it happened, the participants went to a quiet place in pairs to share with each other certain harder events in their lives, while the other had to practice active listening and empathy. The participants created scenes to demonstrate what happens when certain rules are not adhered to or are not defined. They wrote their goals on arrow-shaped pieces of paper, and checked daily whether they've been met. And then, of course, it was time for peer group supervision."

The more informal elements also included art therapy sessions and a cultural night, where the representatives of the partner countries presented their own homelands through interactive activities.

During the three years, this programme has become perhaps the strongest training of 'Együttható'; it was given a different focus every year. Today it also has a website, and the steps of the training can also be learnt from a book. It's not a bunch of dry information; rather a written form of the case studies presented - the Association disseminates the publication among organisations. The feedback shows that there's great demand for the programme; not only did the participants have a good time, but they can also use what they've learnt in their practical work. "What they heard was new to some of them", saysElemér Szentpétery, talking about the after-effects. "Since then, they have implemented further events in ten countries to transfer their experiences. Some use the method in chairmanship, whereas others use it for client-related decision-making. By now, an active international community of sixty members has been established."