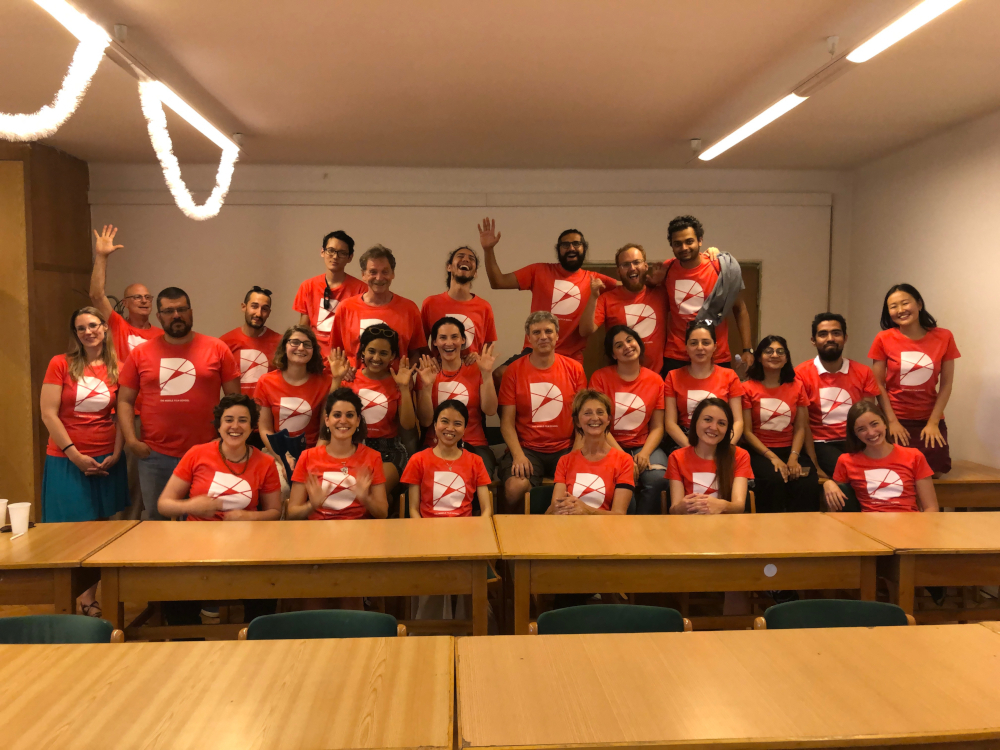 Coordinated by the University of Theatre and Film Arts of Budapest, the joint Master's degree grant programme was launched for students of documentary filmmaking in 2012, in order to allow them to learn, improve and gain experience 'without borders'. Each year, about 24 students join the programme, and visit the capitols of the partner countries, that is, Lisbon, Brussels and Budapest. Thus, they need to manage in diverse cultural environments, overcome difficulties and succeed outside their normal social environment, and all that in English. During the four semesters, the students complete subjects worth altogether 120 credits and make about a hundred films, which various festivals often include in their programmes.

The DOC NOMADS programmes also allows students to apply for summer universities at film schools outside Europe, complementing their Master's courses. The first summer university in 2018 was hosted by Lebanon, and in 2019, a workshop on documentary filmmaking was organised in Georgia. The workshop helped the participants improve their skills of presenting the world around them as realistically as possible. They needed to capture a story which presented a particular situation, location or person through their own perspectives, using video and sound effects. The purpose of this assignment was to develop students' skills of choosing a topic and establishing relationships in a foreign environment, as well as to get them accustomed to working in a creative team.

DOC NOMADS is one of the few European joint programmes which have been internationally accredited. The procedure was conducted by the Flemish VLUHR agency, a member of EQAR register listing European quality assurance agencies, and as such, is authorised to conduct international procedures within the European Higher Education Area. The joint degree of DOC NOMADS is therefore fully recognised in a number of countries.

Based on strict criteria, the European Commission qualified this Erasmus Mundus courses as an "Erasmus+ success story".

Born in Bratislava but living Budapest since her childhood, Asia Dér graduated from the Institute of Communication and Media of Pázmány Péter Catholic University, and she became one of the first graduates of the DOC NOMADS international documentary filmmaking master's course. We asked her about how this extraordinary experience, the course conducted in multiple countries and the knowledge and relationships gained there, had changed her life.

What has DOC NOMADS given you?

I have lots of memories which I'll never forget, but the first that comes to mind is when at the end of the third semester, after screening the exam films, we were standing outside Uránia cinema, holding each other and crying. That was the last time we were together; in the last semester we went back to Lisbon, Brussels and Budapest in three groups to shoot our exam films. I was as sad as never before in my entire life. We had become a real family, doing everything together for one and a half years: we lived, danced, analysed movies, criticised each other's plans and discovered new cities together...

What are you doing now?

I've just finished my first full-length documentary which I co-directed with Sári Haragonics. I met her, for example, while shooting a DOC NOMADS film in Kazincbarcika, where we worked together with students from the University of Theatre and Film Arts (SZFE). Under the Incubator programme, I could also start to shoot the film I Didn't Die, and now I'm working on it with a small crew.

Meanwhile, I was admitted to the Doctoral School of SZFE; my research focuses on the long-term effects of documentary films on the subjects and the directors. All that I have listed here would have been impossible without DOC NOMADS. It was during the master's course that I became sure that I wanted to pursue documentary filmmaking, and also that I would be able to do it. I owe a lot for this to my fellow students and teachers, especially to Tamás Almási and Margarida Cardoso.

Why is it good to have an international diploma, recognised by a number of universities?

I think it's a good thing in itself when you don't just know the educational system of one country, especially when it's arts education. In each country, they teach according to a different perspective, cultural habits and methods, and the relationship between teachers and students also differ; you can only learn from these, even from things you don't like that much. Many things which used to be obvious, because that was the way it went in Hungary, was questioned. For example, why there were so few female teachers at universities. In Lisbon and Brussels, the ratio of female and male teachers was 50-50 percent. The reason why it's important is not just 'being PC', but because when women don't teach filmmaking, film history or philosophy, a lot of aspects are left out. Fortunately, it has changed a lot at SZFE since then, too.

But a DOC NOMADS diploma has other practical benefits, as well. There are many film grants which you can only apply for if you are a citizen of the given country or you graduated from university there. We can apply in all the three countries with our film plans if we can find a producer who is interested. And since we also had producer teachers every semester, we have personal contacts we can start from. Even if I need a foreign co-production partner or crew member, I can get at least 3 offers within minutes, too. Today you won't find any international application or festival results without some DOC NOMADS names. It has become a real brand by now.