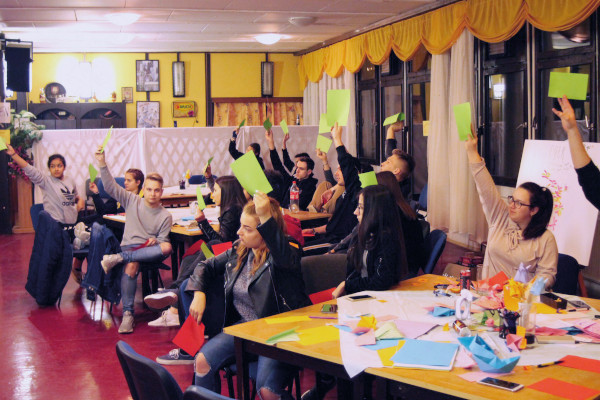 The frequency and the quality of the dialogue between youths and decision-makers are, in many cases, in their infancy, even though youths know what they need: if they commit to a cause, they can achieve fantastic results. That is exactly what happened in Eger, too, where the city can now witness lasting changes due to the Erasmus+ youth dialogue project called #TEger, implemented by the Local Government of Eger City with County Rights. I talked about the project with Coordinator Boglárka Huszthy.

We were greatly affected by our joint participation with the Municipal Student Council and IFI PONT Youth Information and Counselling Agency in the project titled “Közelítő”, implemented by the Federation of Children’s and Youth Municipal Councils (GYIÖT), which exposed us to impulses concerning youth participation that we also wanted to adapt to a local level. We wanted youth representation and its standards to be increased in Eger, so we organised an event called “vÉLeMÉNY PIKNIK”, where we also invited the representatives of student councils. We enhanced the cooperation between them and the Municipal Student Council - this latter being one of the most active peer representation channel in Eger - through the exchange of good practices and experiences. Working with them was of special importance, because in order to establish a stable system, we need to channel the opinions of as many youths as possible. All these experiences drove us to plan the #TEger project, consisting of three main steps.

The opening conference training was a four-day event, implemented through professional support from GYIÖT in Felsőtárkány. It was attended by the representatives of student councils, the teachers supporting their work, students interested in the topic, and, regarding the scope of the project, disadvantaged youths. The training involved students from thirteen secondary schools altogether.

We also invited decision-makers: the operators of each secondary school were involved, the Chairman of the Coordination Forum on Drug Affairs and all the representatives of the local government. The decision-makers sat down to reach an agreement; it was obvious that political interests were now put aside, and the participants listened to the ambitions of the youths and sensed their responsible and forward-looking thinking.

The participants of the training learnt about the local channels of representation, how they could express their opinions, what partnership meant, and what problem-solving models were available to them. They elaborated on the issues they were faced with at a school level, such as increasing the effectiveness of student councils or developing community life at school. The next day, they left the constraints of the school walls and identified municipal problems, such as the lack of social spaces for youths, the cleanliness of public spaces or the unsafe pedestrian crossing near the school. Some even brought up such global issues as mental health and cyberbullying. The common work tore down the walls between the schools, eliminating prejudice.

They presented their thoughts to the decision-makers, who listened with open ears, and formulated some relevant proposals on the spot. The meeting had a positive effect on everyone; many said they had regained their trust in expressing their opinions, and this initial step also resulted in increased police control at the pedestrian crossing mentioned above.

As the second step of the project, sixteen secondary school and municipal dialogue days were organised, addressing the issues identified at the training. In each case, the youths could participate in the process on a voluntary basis. Some schools devoted an entire school day to the event, while others rented a cinema for students groups to watch thought-provoking films and videos. The municipal dialogue day addressed youth related developments, on which those attending gave feedback.

The youths put a lot of effort into organising each occasion; in one secondary school, the student council asked the entire student body what issues to address on the dialogue day. The topics which arose included being regularly late due to public transport and the price-to-value ratio in the school buffet. In order to address this latter, the students prepared a complete comparative analysis, visiting 5-6 school buffets and comparing the prices and quality with those of their own school. They also invited the head of the public transport company, the owner of the school buffet, the school operator and the principal to the dialogue day, then they shared their insights with them. As a result, the decision-makers made some commitments, as well as certain steps. For example, public transport worked fine for two months; then, however, the same problems occurred again, unfortunately. Nevertheless, I still believe that all this has shown the youths that such dialogues have a power to make an impact.

Closing the project and some unexpected outcomes

As the last step of the project, and with the intention of establishing a new tradition, we organised the Municipal Youth Forum. Here, GYIÖT was responsible for the professional implementation, and in the afternoon, we held the End-of-Year Festival, where we presented the project outcomes.

In the case of student councils, the visible change was the redefinition of their own roles. Their responsibility was re-evaluated; they were given tools which they could use to channel students’ opinions into the dialogue conducted about them within the school. In some places, the school management is more reluctant to face the fact that there are some problems in the institution to be addressed. We and the student councils also discussed how to deal with this and how they should act in such a situation.

An achievement which exceeded our expectations was that the dialogue between the youth and the Local Government became so strong, that the students were also invited to forums shaping the future of the city, which had never happened before. The goals of the local youth policy are set forth in the Child and Youth Concept, planned for a six-year period, and the tasks undertaken to achieve these goals, as well as the needs and proposals defined during the project are summarised in the Action Plan.

The youths strongly expressed their need for some community space, as well as a park for extreme sports; there had been a number of negotiations about these with decision-makers. As a result, the construction of an extreme sports park has been given priority in decision-making. It was interesting to find that the topic also moved groups which otherwise didn’t join the rest of the project; we rented a ramp for the festival, on which the participants could paint the lessons drawn from the project in their own words. That was when skateboarders, scooters and bikers joined in, too.

It was also how one of the most tangible outcomes of #TEger was realised; in the building of the old Uránia cinema we created a community space where students can meet after school and which can also accommodate youth events. The operator of the cinema also asked the youths about their opinions, who presented the proposals identified during #TEger.

The students’ motivation didn’t decrease after the project, either; as far as I can see, the need for a dialogue has become natural for them. There is now high-quality youth involvement. They know that they are entitled to it, and although the decision-makers have changed since the project, they also want to maintain a long-term relationship and a dialogue with the youths. We need constant people to be responsible for taking care of all the things which started to grow last year.

This is happens  when a project is based on inner motivation, when the youths receive the necessary tools and a supporting presence, when they know who to turn to and rely on in matters which affect them. In these cases, they are often capable of achieving results of great impact, working towards the goals they have set, even with minimum funding.