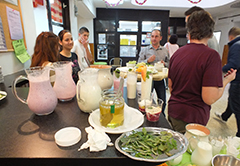 What foods we eat, how we spend our spare time, how much sport we – these are questions that matter to everyone; however, they really become vital when it comes to the young generations following us. Below, we will present projects which, besides developing intercultural competences, laid great emphasis on educating responsible thinking and conscious, active citizenship.

Many say that a project can only become really successful when it focuses on current issues and cooperates with the right partners to implement its goals detailed in the grant application. The two-year lifestyle awareness project implemented by Páterdombi School for Vocational Education of Zalaegerszeg – or Báthory István Vocational School of the Vocational Training Centre of Zalaegerszeg, as it is called now – was based on a West German twinning town relationship that goes back to over 30 years ago. The idea that Hungarian and German students should launch a project to examine their own lifestyles was first brought up in 2011, during a round-table talk among teacher communities who were in regular contact. That was how the idea of Long Life – Quick Lifestyle – Slow Food was born.

The Slow Food project, on the one hand, called students’ attention to health-conscious life – the participants made a survey assessing the current state of affairs and a video presenting physical exercises. On the other hand, it made students of catering, tourism and trade aware that they needed to take responsibility for their environments within their own future jobs, too, whether as a cook or a confectioner. At the Zalaegerszeg school, students made a herb garden, where they grew herbs characteristic of the region, collected recipes, wrote a cook book, and then they used their own herbs when cooking together. Of course, the meetings were the highlights of the project.

Besides strengthening individual and community responsibility, the German and Hungarian project also significantly contributed to developing the students’ linguistic competences. The students from Kusel and Zalaegerszeg communicated in both English and German, through various free online communication platforms (Facebook, Skype, WhatsApp, Viber).

Many know the slow food movement as the contrary of fast food, and associate it with slow and conscious traditional eating habits; however, it represents far more than that. The primary goal of the movement is to preserve and utilise local gastro-cultural values, as well as to contribute to the subsistence and financial success of the communities and enterprises concerned.

The teachers and students of Ady Endre Primary School of Pestszentimre took on an uncommon challenge when they addressed one of the most delicate issues of our time, responsible consumption, in a Comenius project.

The project called Verantwortungsbewusster Konsum was implemented by schools from 8 European countries. The intensive international partnership has contributed to developing the students’ linguistic competences; also, they have become more responsible during the work, and their self-confidence and cooperative skills have improved a lot. The project also involved students with special educational needs, for whom it was particularly significant to practice uncommon work processes.

A major goal of the project, structured around three central issues, was to develop a critical consumer approach in students. They learnt about the origins of clothing products, the shocking conditions of child labour and the adverse effects of the toxic chemicals used in clothes. They learnt to accept their peers with different consumer habits, and their social sensitivity improved a lot. Healthy eating habits and health maintenance were also central issues; they examined their own as well as their age group's eating habits, prepared healthy foods and they even compiled an international cook book. They conducted a research on harmful substances used in cosmetic products, learnt about their effects, and each student prepared their own cream from natural ingredients.

Messzelátó Association participated in a two-year Grundtvig partnership project between 2013 and 2015, seeking to implement programmes related to a sustainable urban lifestyle and urban farming in cooperation with the active local community.

The increasingly popular movement of urban farming is a good example for the need for a sustainable urban lifestyle and for learning about the path our food takes from the soil to our plates. In the urban gardens established, the Finnish, Latvian, Turkish and Hungarian partner organisations addressed various issues and programmes with the active involvement of local adult students, such as “How to organise an urban garden”, “Harvest festival and preservation procedures” or “Healthy eating”. Within the project, they were also involved in international initiatives such as the Restaurant Day. As part of the Restaurant Day, the members of Grund Garden, established in the 7th district of Budapest, prepared various dishes using the seasonal vegetables grown locally and offered them at a small local event. One of the most important achievements of the project was community building – the adult students and the new groups involved in the activities (aging local volunteers, marginalised social groups) gained new knowledge, skills and experiences through each activity, which they could then transfer to the new members of the community at training programmes and share at international project meetings. The self-organising community of the garden is still actively organising community events, such as family programmes and charity events.