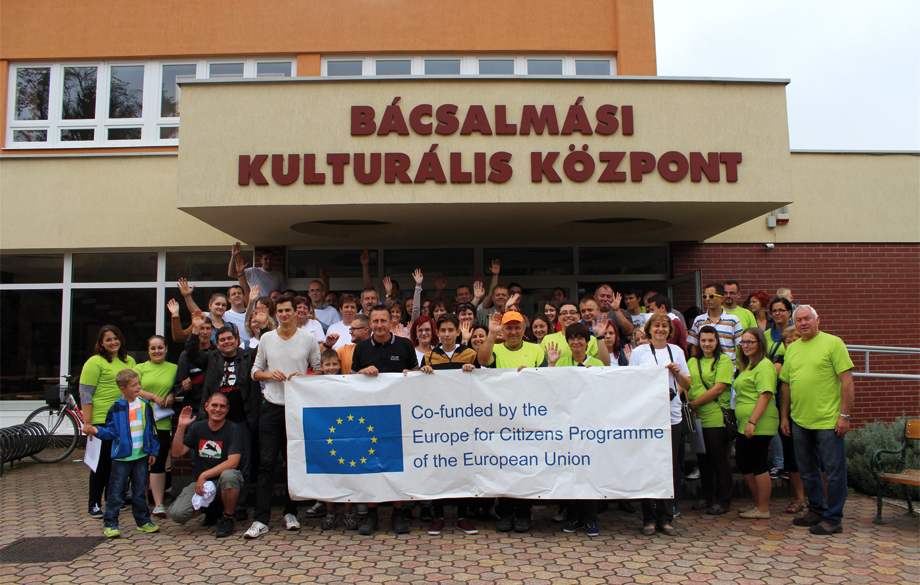 This year, the town of Bácsalmás has held its traditional twin town meeting as part of the Europe for Citizens programme. The delegations from the twin towns shared their good practices in the fields of local economic development, the prevention of unemployment and public security at professional workshops. Coordinator Kinga Némethné Légrády told us about the project.

Twinned town meetings have been a tradition for many years now in Bácsalmás. The twinned towns maintain close relationships, typically for historical reasons. From the very beginnings, the history of the town intertwined with the lives of the ethnic groups living in its area, and it’s still a town of four nationalities – Hungarian, Swabian, Bunjevci and Roma. The settlements and relocations conducted in the past century tore many families apart; in order to reunite these families, twinning relationships were established with Bezdan (Serbia), Backnank (Germany), Veľký Meder (Slovakia), Borsec (Romania), Gizalki (Poland and Bajmok (Serbia). The twin town meeting held in Bácsalmás is, therefore, also a family meeting of expatriate relatives.

Due to the relationship among the towns, both the vocational school and the secondary grammar school in Bácsalmás maintain a student exchange programme with schools in Backnang. Students can travel to Germany to learn the language and do traineeship, whereas in Bácsalmás exchange students can learn about the history and values of their expatriate ancestors. Thanks to the geographical proximity, they also maintain close relationships with the primary schools of Bajmok and Bezdan, and they regularly host delegations from these schools at major events.

This year was the fifth time that the twinned town meeting titled ‘A Multitude of Peoples and Tastes’ had been held, where each town had an opportunity to present the culture of their respective countries in the fields of gastronomy, folk art and folk music. Besides the 250 delegates from the twinned towns, around 8 thousand visitors came to see the five-day programme series.

The town considered it a great opportunity that this year's event was implemented as part of the Europe for Citizens programme. “Our long-term goal is that the meeting should act as a kind of catalyser to contribute to smoother partnerships in the future. We didn’t just seek to organise an official event, but also to consolidate the basis of a fruitful relationship. We expect the partnerships to bring along new twin school relationships, civil programmes and joint projects already in the near future”, said Project Coordinator Kinga Némethné Légrády.

During the project, each town agreed that the school partnerships should be reinforced by a contract and filled with new functions. As a result, the first action will take place on 15 March 2016, when they will celebrate the national holiday together with the student delegations from the Hungarian-inhabited towns over the border, and each school will prepare with their own performances.

The idea behind joining the Europe for Citizens programme was that, besides the decision-makers of the twinned towns, the civil organisations, volunteers, as well as disadvantaged citizens should also be connected to the EU’s bloodstream, to make them aware that by joining forces they can do even more to develop Europe’s future. With that in mind, the delegates from the twinned towns were selected to include civil organisations, teachers and students, as well. Each team had to make a presentation on specific EU topics, to be discussed at workshops held on the spot, developing joint programmes.

“We sought to transfer as much knowledge as possible to each generation of citizens. At the same time, we considered it important that the young people should learn about the history and values of the European Union through playful team work. Besides, we also tried to motivate them to gain further knowledge and call their attention to the benefits of working together”, the Coordinator emphasised. To achieve that, the EU tent of the event offered games and presentations related to the EU, whereas the school teams delegated by the twin towns were invited to participate in a 'Who knows more about the European Union?' contest. “Each twinned town held their own semi-finals, and the final was held in Bácsalmás”, she added.

The diverse beauty of the European cultural heritage was brought closer to the participants through presentations of folk art, folk music and gastronomy. The civil organisations, folk dance groups, local producers and artisans presented their skills and produces on the stage and in the thematic tents and courtyards of the event. The organisers wanted the success of the event to be known beyond a local level, so they even made a few-minute-long video.

According to Kinga Némethné Légrády, several elements of the project can be regarded as ‘good practice’, since a very varied programme was implemented, not by a single team, but teams headed by a person in charge of each topic within each twin town. The organisers in Bácsalmás only determined the main directions, but gave a free hand in the implementation. The preparation for the workshops, for example, was the mayors' duty, who selected the topics from a pre-defined list. At the same time, the drawing competition for primary school students and the EU contest for upper-grade primary school students were organised by the school principals. The traditional performances of the twin towns, as well as their appearance and cooking in their national tents were coordinated by civil associations.

“The participants of the programme can be divided into two major groups”, the Coordinator explained, “the members of the delegations and the visitors of the traditional performances.” The meeting has deepened the professional relationship between the town leaders, and they could also share methods to solve new, current issues. The relationship between civil organisations and school groups was also consolidated, and friendly relations were established. As regards the citizens, the programmes of the event have clearly developed their cultural sensitivity and solidarity, as well as their knowledge of the European Union.

The event so successful that plans to continue have already been outlined; the members of the partnership wish to continue their cooperation in promoting local products and offering cross-border tourism packages. “What we consider our greatest achievement is that due to the relationships we’ve established, we dare to dream bigger projects in the future, and we will also apply for Networks of Towns programmes”, said Kinga Némethné Légrády.