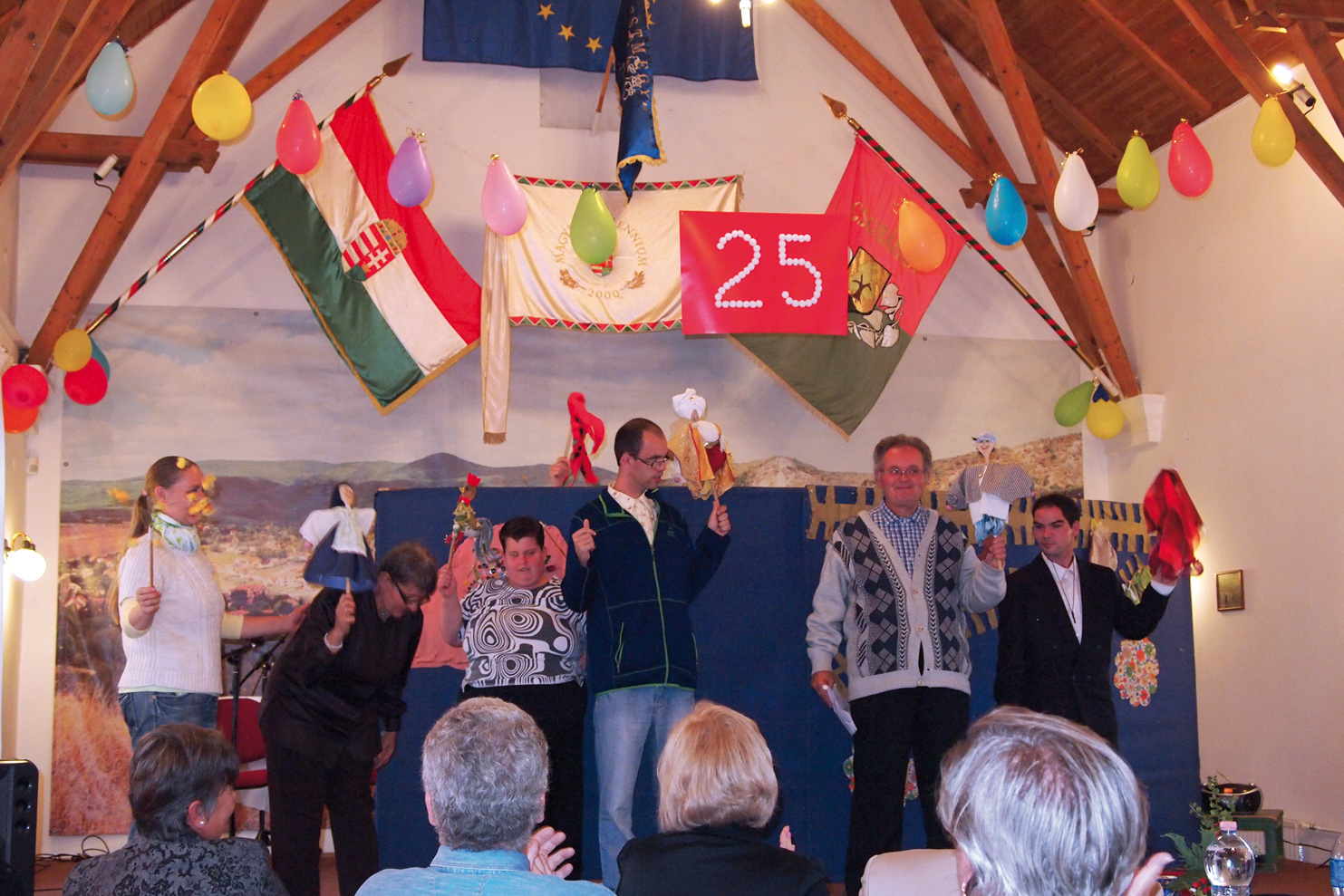 PEOPLE WITH DISABILITIES CAN BECOME PART OF THE COMMUNITY

What is your project about?

One of the most important elements was to present the integration of people with disabilities at a European level. At Kraxner Alajos Special Employment Residential Home operating in Csobánka, visitors could personally see what an active role people with disabilities can play in the life of the village.
Another important part of the programme was the inauguration of the garden cemetery with Swabian graves. In March 1946, 1,310 German-speaking inhabitants were relocated from Csobánka. The houses and the livestock soon – on the same day – found new owners, but so far, no one has taken care of the graves left behind. We wanted to change that.
We also held a conference on active European citizenship during the three-day event.

I’ve always laid great emphasis on paying proper attention to people with disabilities in our village, so it was quite obvious that they should be involved in the twin town meeting, too. We are in daily contact with the residents of the local special institute; every weekend, there's some event where they regularly perform dances, a nativity play or some other performance. Besides, they also bring their merchandise to the market called ’Made in Csobánka’, selling local products, they make candles and lavender bags, so even people with disabilities can show what they’re capable of.

How do the local people relate to them?

In Hungary, the integrated residence of people with disabilities was first realised in Csobánka. The example had come from Western Europe, and the underlying idea was that those who can either fully or partially take care of themselves should be provided independent residence. Owing to the lack of time, visitors could only pay a flying visit to the institute, but the residents participated in each programme. For example, they performed the puppet show ‘The Little Rooster’s Diamond Button’. They did everything, and one of them even compered the programme. The participants were given an English version of the story, so they could follow the scenes.

Do you think it has set an example to be followed elsewhere?

There were a number of special education teachers, including the Mayor of Wertheim, who were astonished at how these people with disabilities could learn a play with such accuracy and how they could be prepared at such high standards, which, professionally speaking, really is a challenging job. It was also very instructive for them to see how much we share our lives with them.
It’s therefore obvious that Csobánka has shown something new to the visitors and not the other way round…
Yes, we have inspired others. We’ve demonstrated that people with disabilities can be integrated into the community. The visitors could see for themselves that the level of this integration in Csobánka is so high that these people have entirely become parts of our everyday life. Our foreign guests also pointed out that they hadn't seen any other Eastern European country achieving so much during the relatively short time that had passed since the regime change.

Did the other programmes have such benefits, too?

The inauguration of the garden cemetery was an example of how we respect our past. The visitors were deeply touched by the event. The celebrations began with a multilingual mass held by a priest who had formerly served in Switzerland and spoke Italian, French and German well. So far, programmes of a religious nature haven’t been part of the twin town meetings, so it was a new element. Everybody felt what it meant to those relocated that they needed to leave the graves of their relatives behind. Note that these graves are unique Swabian crosses carved from one piece of stone. Such crosses are not made anymore and they are museum pieces. These graves will now be preserved for many generations. Also, the writings on the tombstones can help a search for settled Hungarian ancestors.

What issues did the conference focus on?

It focused on the importance of civil initiatives launched at a local level. On the one hand, the civil organisations from our Hungarian and foreign partner towns had a chance to present themselves; on the other hand, they also presented the programmes they ran locally in order to eliminate poverty and social exclusion. We also discussed local initiatives aimed at the preservation of natural and cultural heritage. The presentations were followed by round-table talks with citizens from the partner towns.
Did you benefit from the fact that the project was implemented as a European partnership?
We did not only benefit from it; we couldn't have realised the event otherwise. A small village such as Csobánka wouldn’t have been able to implement an event of such standard and volume on its own. That's the very point of the European dimension. We alone can’t organise such events as for example Wertheim, our German twin town can, but through the ‘Europe for Citizens’ programme, we had a chance to get into Europe’s bloodstream, if you like. At the same time, citizens from other EU countries also got an insight into the life of such a small Hungarian village.

Are you planning further projects with the twin towns?

Yes, definitely. Next year will be the 70th anniversary of the relocations. Many of those who had to leave the country are still alive. We will focus on that, and we want to submit a project application concerning the relocations, in which our twin towns are also interested. Since the event we've had regular meetings, and there are still many inquiries about when the garden cemetery can be visited. There’s also great interest in our relationships established with Kraxner Alajos Institute.

Do you think you’ve managed to raise the interest of young people towards such projects, and generally towards civil activity and ideas of European citizenship?

We clearly have. Since then, many of our young people have visited a European cultural event, the very topic of which was our common European citizenship. The young Hungarian and English people have created a joint Facebook group, and we're also planning a joint youth meeting.