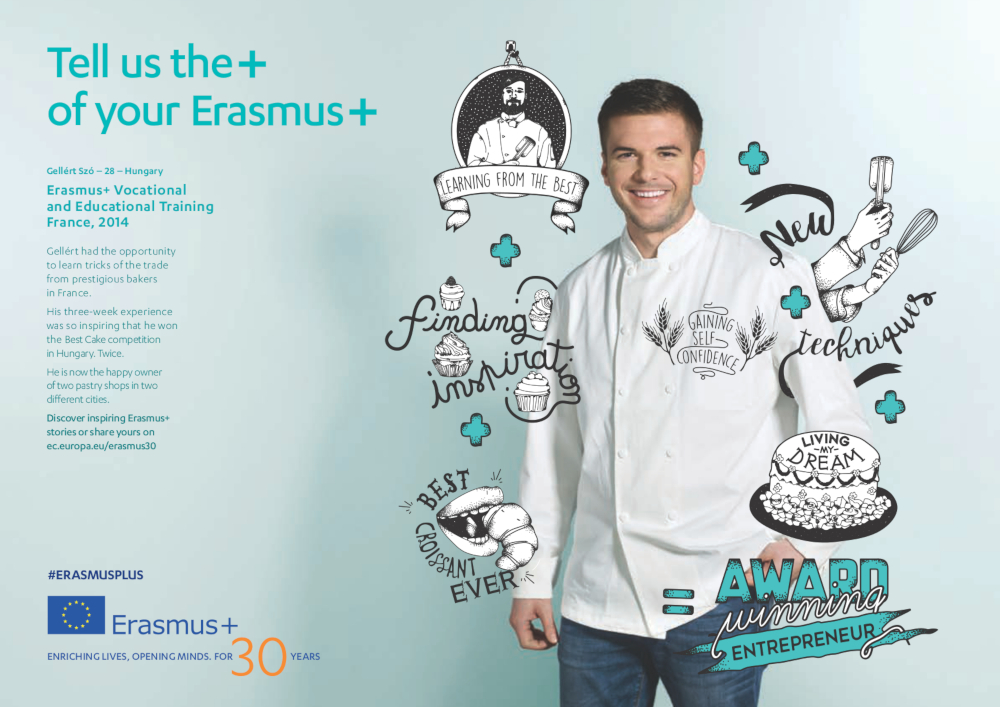 Whether people have improved their chances of finding a job, developed fresh perspectives on sustainable development, learnt a new language, gained a clearer idea of European citizenship, or found a new passion for volunteering: Erasmus+ has produced many success stories. The Erasmus Programme has been enriching lives for the past 30 years. It is not just a time in someone's existence, it is a turning point.

The Hungarian Faces of the Erasmus+ Programme

For the anniversary, inspiring stories were selected also in Hungary to present the "pluses" they received from the Erasmus+ Programme. Read on and discover their stories.

A television presenter, with serious achievements as a journalist and a documentarian, too. In 2011, exactly a year after she’d returned from her Erasmus trip to London, she won the Gundel Arts Award and the Junior Prima Award for her diploma movie called Slovakian Hungarians. Her choice of topic was a conscious one: Angela was brought up in Slovakia, in her family the intertwining of languages and nationalities were a natural phenomenon, and that’s why openness was a cornerstone of her attitude. In acceptance, empathy and diversity she found a medium which is considered a valuable asset in her work, since day by day, a lot of people share their stories and thoughts with her.

One of Europe’s most successful female entrepreneur, and one of the young founding members of the online platform ‘PublishDrive’. Her company helps writers publish their e-books, already published in 240,000 digital libraries. So far, the enterprise has sold 200,000 e-books in 44 countries and in 33 languages.  And the key to this success? Among others, an international approach and a sense of purpose. These are skills which Kinga could also experience as an Erasmus student in Switzerland. This year, she was included in the list of successful young Europeans under 30 by Forbes magazine.

An oenologist from Szekszárd and a member of the National Wine Experts Committee. In 2014, he and his family were awarded the title ‘Winemaker of the Year’. Tamás already wanted to challenge himself in the big wide world as a university student, and his curiosity drove him as far as Germany, on his first internship. Later, with support from the Erasmus+ programme, he also travelled to France and Portugal, where he met a lot of people who gave him inspiration to his work. Since then, he has participated in countless world competitions, and he’s constantly on the road. He believes that you can only improve on the move, and to that, he was undoubtedly given a firm foundation during his scholarship travels.

She passionately believes that a strong bond between parents and children can make the world a better place. She uses various methods and personalised advice to call the attention to the fact that the greatest gift we can give our children is ourselves: attention, cooperation, patience and emotional safety. Zsuzsanna thinks even difficulties which seem insoluble can be overcome, but it requires parents to realise that they also need to pay attention to their own feelings. ‘Hand in hand parenting’ emphasises a close parent and child relationship, and Zsuzsanna relies on that in her work at Szelíd Szavakkal (With Gentle Words) Foundation to ensure families long-term success.

His perseverance and diligence sets an example for many young people. As a junior Olympic champion in kayak, he could experience himself that without effort and clear goals, success won’t come easy. By now, he has concluded his career as a sportsman, and building on the firm foundations he’d gained, he is consciously progressing with his plans. Currently, he’s doing research as a PhD student and publishes in the field of international mobility. His motivation is not a random one; through Erasmus+ programmes, he has visited various countries, including Portugal, Malta, the Netherlands, as well as the UK. His motto is:  “Mobility is a lifestyle - you only need to take it on.”

She teaches at Széchenyi István Primary School of Dunakeszi; she was involved in the Erasmus+ programme as a teacher. She finds foreign projects a very inspiring environment; as she puts it, she even needs the challenges and adventures which come along with them, because that’s what keeps her young and playful. Due to her acting past, she has always looked to find opportunities where she could combine her passion for playing and acting in her everyday work. In the past few years, she has travelled to the town of Exeter in South West England for training twice to learn more about applying the tools of acting and drama technique. Today, she begins each class with the warm-ups and games she’d learnt there.

He spent his apprenticeship in France, where he learnt the secrets of his trade from local confectioners. He had been deeply interested in baking as early as a teenager, and during the time spent abroad, he further increased his knowledge and skills. Gellért is currently the happy owner of a confectionery in Salgótarján, and he’s recently opened his second shop in Eger. Relying on his knowledge gained in the Erasmus+ internship programme, he won the Hungary’s Cake competition in 2015 and in 2016.

She’s made her dream come true: her passion has become her profession. In her social enterprise called ReCreativity, she further developed the concept of recycling, turning materials appearing to be garbage into various household objects in highly creative ways. She works with her business partner, Anna Sipos, and they share their knowledge at workshops all around Europe; their mission is to show young people domestic recycling from a different aspect. Use boxes to make a wallet or a bag, as it happens, which is even trendy? Why not? That’s why ReCreativity is not simply an environmental project; it’s also an attitude change and sharing knowledge.

László Davidovics is the Principal of Bethlen Gábor Vocational School of Agriculture and Food Industry of Gyomaendrőd. He has taught for 30 years, and he also coordinates international programmes, due to which now over 600 young people have participated in foreign study trips or apprenticeships. His work was recognised with the prestigious European Citizen’s Prize of the European Parliament in 2015. For him, the first exchange programmes were the most memorable ones: he was so worried about his students accommodated on farms which were 40-50 km away from each other that he regularly visited them. His students could see and feel his caring attention, so they gave him the name Papa Leonardo. For a long time, adults called him that, too, so the nickname got stuck with him.

He completely left his comfort zone: he was an EVS volunteer on a Swedish island. After many years’ work experience gained at a multinational company, the community of the ecovillage was a breath of fresh air for him. For example, he travelled between the village and the city in a velomobile, and on the island, he could feel like a real “eco James Bond”, ready to save the world. During his one year, he tried environmental friendly gardening and building techniques, sailed over to Estonia and gathered a lot of experiences in his community. Róbert learnt a lot from the Swedish, and he shares his experiences with others in a blog. Inspired by his adventures in Sweden, he dreams of becoming a social entrepreneur, which he is currently working on.

Worked as an EVS volunteer in Cyprus, in a refugee home run for unaccompanied minors. With two co-volunteers, she made a short documentary about the cultural diversity of the island, and won the main prize of the French national Erasmus+ office.

Daniella thinks that EVS is a great opportunity to meet people from various cultures, religions and continents, which teaches you acceptance and tolerance, since each person is unique and that’s exactly what makes us all special.