Main PageStories and best practicesEurope is a Coherent, Living Whole
Europe for citizens 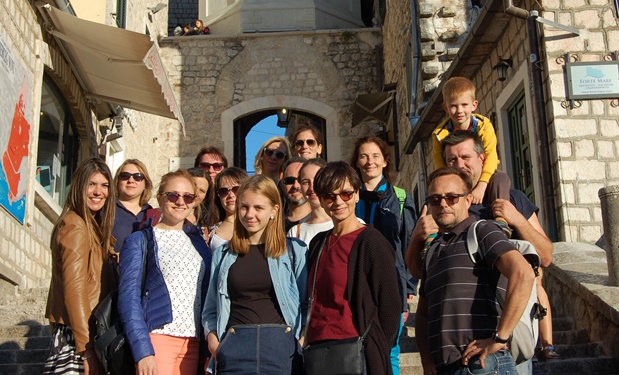 Through The Citizen’s Path in the Mirror of History project, six nongovernmental organisations from four countries launched a dialogue about the freedom and rights ensured by the European Union. Due to the crossgenerational programme, the younger generations have also become aware that we need to build and protect our common values. The outstandingly successful initiative has recently been recognised with an European award, awarded to NGO’s contributing to building democratic communities. We talked to project coordinator Kata Kádek, representative of the Hungarian partner, Regional Association for Hungarian Identity.

What does the project title refer to?

The peoples of the partner countries – Portugal, Montenegro, Hungary and the project initiator Lithuania – could all experience life under oppression. In the project, we tried to approach the issue of human rights in a way which is easy to understand for young people. It was because events of the past are not necessarily related to the situations we can experience today. It’s hard to imagine that world for someone who has never lived in oppression and never heard stories of it from their families.

Why did the organisers cooperate?

Our goal was to point out that the human rights we enjoy today are not self-evident; it took the struggles of our ancestors that certain rights, such as the right to freedom of opinion and expression, seem to be constant today. We wanted to show together how our belonging to the European Union can help us protect our achievements, and how common European interests can enhance our sense of security, compared to our former politically, intellectually and economically isolated opportunities.

What were the elements of implementation?

Each partner made a short video on past and current events and future opportunities related to human rights. The videos were made by young people with the help of experts, and they also interviewed people who gave their own personal accounts of the years ofoppression.

The four interviews were turned into a longer, common film this year, which we presented in each country. After watching the film, we held a Forum Theatre performance for about a hundred people from each country, which encouraged the participants to act and respond. Thus, the human rights guaranteed by the EU came up again.

What can learning about others’ stories give us?

It’s worth constantly broadening our horizons, because when you can see farther, you’ll get a totally different view of the world and your place in it. Always seek knowledge, Socrates advised in his Apology. We should listen to his advice; let’s set off to the South first, toward the sea, then towards the Visegrad Four, and then to the borders, too. We will find the special wonder of meeting ourselves everywhere. Europe is a coherent, living whole.

What was your main achievement?

I think it was when we managed to show how important and valuable Europeanlevel cooperation and discussion were, despite the existing deficiencies and internal tensions.

How did the young people involved in the project feel?

The leading role of making the Hungarian film was assumed by a secondary school student from Tata, Kristóf Pölöskei. He told me he’d never thought what a great impact Forum Theatre can have on the participants. In this genre, everyone is a character and we live our lives on a stage, too. Kristóf could see how teenagers entering the room with a sceptical expression on their faces can soon become NGO representatives who can communicate as partners, supporting their feelings with arguments, and able to represent and defend their views. That was when he understood that the project induced a lasting change of attitude in the participants. These are very important thoughts, ones which are not only illuminating for young people.

What is the significance of the project being implemented by four countries?

There would have been little chance of us visiting each other’s countries, if it hadn’t been for the project. But we realised already at the first meeting that our lives were virtually the same. We had similar pasts, a common present and an interdependent future, too. We come from late 20th century ruins, struggle with the migration of young people and the depreciation of conventional values, and we’re all looking for a way to retain Europe’s values and prosperity. We have managed to build a strong professional bridge towards each other, giving rise to new project ideas.

How was the common work conducted?

The project was initiated by the Lithuanian partner, the House of Arts and Education of Vilnius, who raised their former successful national project to an international level. We implemented the tasks as equal partners, alternating responsibilities and in a deepening cooperation.

Looking back, what is it you are personally most proud of?

As regards MIRE, one of the greatest achievements was our very participation. During the common work, there were difficult moments when the project presented us with unusual challenges. But we stepped over our own shadows and developed. It was a great lesson to see that our partners did the same. For us, the programme caused a serious change of approach, which formerly I wouldn’t have imagined. From now on, we will only organise longer-term projects. We are closing this project as a stronger, harder, more experienced organisation, and we are looking forward to the next such opportunities.

The project was recognised with an European Award for Citizenship, Security and Defence award, given to European NGO’s building a democratic community based on citizens’ active participation. How did you contribute to this goal?

Due to the project, the message of Augusto Bal, the founder of Forum Theatre, directly reached 600 young people: if we just idly watch the events, nothing will change. The award given to us at the Berlin Security Conference symbolically recognises this work, as well as the basic idea that through cooperation, we have a better chance of protecting our safety, defending our values and retaining our achievements than by remaining isolated and lonely fighters. The project makes us aware that the current status of human rights is an achievement, and it prepares us for recognising and protecting these values.