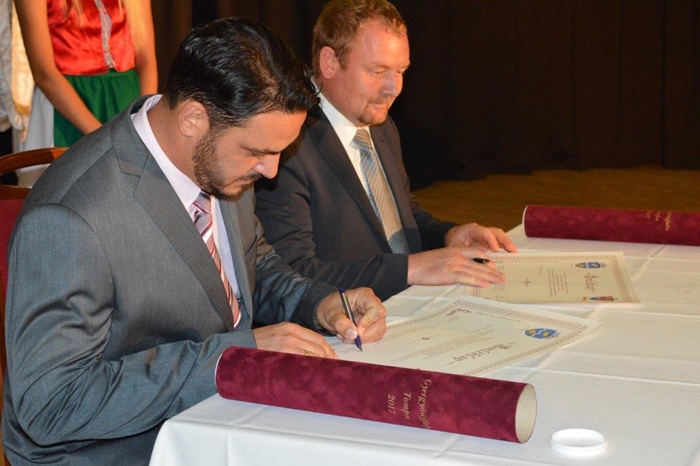 Under the Europe for Citizens programme and as part of the measure town twinning, citizens from small Hungarian, Serbian, Romanian and Slovakian towns and villages held a meeting in Tompa in August 2017. The project, called Solidarity, Sovereignty and Future of Europe Post-Brexit involved nearly 270 participants. We asked László Véh, Mayor of Tompa about the event series.

How did you plan the project?

The idea of the project came from the Brexit referendum held last year, and the subsequent social and political changes. Its main topics were the future of Europe and cohesion, sustainability, besides, particularly the sustainable development of rural regions, as well as the local issues of solidarity and sovereignty. These were the focal points of the conferences, brainstorming sessions and presentations that we organised, and we also provided the participants an opportunity to engage in informal discussions.

How did you choose your topics?

Currently, one of the EU’s most topical issues is Brexit, and due to the location of our town, Tompa, we also included the issue of migration, which has posed rather serious dilemmas along the Schengen borders. I think these issues affect the future of the European Union, too. Besides, we all know that one the EU’s main goals is to enhance economic, social and regional cohesion by, among others, reducing the differences between individual regions. The settlements involved in the project are also affected, and they face with very similar problems in our region.

Why is it necessary to discuss these issues?

We noticed that the issue of Brexit generates great interest; however, many people are not sufficiently informed, so we tried to explain the current processes and their expected effects in a commonly understandable manner.

In small villages, migration is a fundamental issue which affects Vojvodina, Transylvania and the South of Slovakia just as much as Hungary. It is a common problem for all of us. Our project provided a great opportunity to exchange information with those affected and to initiate a dialogue among them.

Who did the programmes address?

This year, the delegation from Transylvania brought along twenty members of the brass band of Suseni (Gyergyóújfalu), all of them in their teens. Through them, we could also get the youth of Tompa involved. The ones most affected by migration are the middle-aged generation, looking for better opportunities. They were certainly very interested in the issue of Brexit. The older generation of our town is actively involved in public life; they could establish relationships with members of the older generation from Vojvodina and Transylvania. Through the programmes, we could address almost all generations.

How can a topic be made interesting for multiple generations?

Several approaches are possible. We tried to explain to the middle-aged generation how Brexit could directly affect them, either as employees in Great Britain or as European citizens. We also sought to encourage them to become more actively involved in public life and local decisions.

As regards the younger generation, we wanted to show them the liberties and opportunities which the EU ensured them, since they have not got personal experience in this respect from former decades. It is a great value and it is natural for them now that with a valid ID card they can travel, study or live in the Western countries anytime.

The way it affects the older generations is that their children or grandchildren are playing with the idea of going to the West. In their case, we also wanted to show that there was a very active pensioners’ club in Tompa, which was engaged in a lot of public activities and was an important player in the civil life of the town.

What do you think the key message of the project was?

We considered it important to emphasise responsibility in making social decisions, the importance of participation, as well as the fact that if you vote and decide on something, it will have consequences. We sought to provide authentic information, and we also emphasised how important it was in everyday life, whether we talk about the responsibility of either individuals, the media or politics. These issues are also worth discussing.

Besides Brexit, the topic of sustainable development was also a key issue. Why did you consider it important?

Being a rural region, we ourselves are responsible very often for our own success, we need to take the steps and implement the developments which can ensure the long-term sustainability of our town. We presented the proven good practices, including, for example, the local product trademark introduced in Tompa, or the social cooperative that we had established. We also discussed the pros and cons of the public employment programme in Hungary.

What value did it add to the programmes that the issues were discussed at a twinned town level?

A dialogue began between the participants; we shared both good practices and problems, and we could also set out a vision. That’s what I consider the greatest value, as well as the fact that the project has brought these settlements closer to each other.

How do you seek to develop your town twinning relationships?

We are maintaining active cooperation with the settlements in Vojvodina and Transylvania, and we are currently working on establishing a new relationship with our twinned town in Southern Slovakia. Due partly to this project, a school in Vojvodina and our primary school have recently established twinning relations, and we have just reinforced our 25-year-long cooperation with Suseni (Gyergyóújfalu). We hope that the project has also given an impulse to the next generation, and they find that it’s worth maintaining relations with the youth of Transylvania, Vojvodina and Southern Slovakia.

We will definitely continue this twinning programme, even though the next topic will probably address other EU issues. I think these programmes are meaningful and justified, and that regional relationships also have a future.