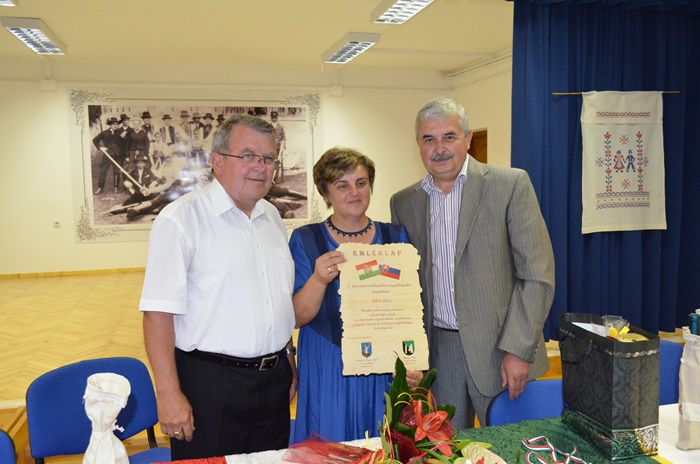 In June 2014, 780 citizens from five countries visited the event in Varsány called ‘5th anniversary meeting under the auspices of family farms – for the revival of self-sufficient farming’. The meeting focused on the exchange of experiences, since the majority of the participants had had considerable practice in the field of self-sufficient farming, which is of a particularly great significance in rural areas.

EUROPEAN COOPERATION FOR A RURAL FUTURE

Judit Pintérné Kanyó, the main organiser of the programme, and at the same time the mayor of Varsány, told us how important civil experience was in the life of a small settlement. She personally had been involved in the work of a number of associations before she was elected mayor in 2010. Perhaps it was this active involvement in the civil society and the experiences gained in the field of grants and organisation during the past years that contributed most to the success of this year’s event. The Association for the Tourism of Nógrád County was again actively involved in the organisation of the meeting this year, which had considerable benefits, as the Association had already implemented a number of winning projects within the Europe for Citizens programme between 2007 and 2013. This year’s event has been the largest so far – no wonder they’re so proud of it.

The organisation of the meeting began in time as usual – coordinated by the local government, with the involvement of five non-governmental organisations, in cooperation with Hungarian and foreign twin town coordinators, as well as innumerable private persons and event organisers, the programme was the result of a joint effort. The village demonstrated an exemplary collaboration in hosting such a large number of foreign guests. Due to the lack of sufficient accommodation in and around Varsány, local families hosted the guests. As a result, the participants got to know each other even better, not only during the events, but also at home, among friends, in a hospitable atmosphere. Formerly, many refrained from such large social programmes; that’s exactly why this year it was a welcome change that most of the village’s population happily joined the common work.

With regard to promoting the meeting and disseminating its results, a number of new methods were introduced: they built very good relations with the county press, as a result of which a number of articles and promotional materials were published, and those living in the neighbourhood were invited on billboards, as the programme was open to all visitors.

The professional content mainly focused on self-sufficient farming and the strengthening of rural farms, in harmony with the goals of the EU2020 strategy on supporting family farms. In Varsány, like in so many other places in Hungary, closing the agricultural cooperatives caused serious difficulties; not only did the labour market situation change with many people losing their jobs, but agricultural production also considerably declined. All this fundamentally shook the economic and demographic situation of rural areas, and therefore any initiative seeking to establish operational farms and creating jobs can bring significant improvement for the inhabitants of the region.

Accordingly, a conscious construction work has been conducted in Varsány for years, with the most important goal being to provide work for as many people as possible and to establish a viable village economy. The main priority is given to satisfying local needs, but of course, they will gladly sell the surplus to those who can support such small communities and want high-quality Hungarian products. Due to the characteristics of the area, Varsány primarily seeks to boost fruit production, and accordingly, this year’s event, too, mainly focused on fruit production and processing. Fortunately, there’s already been a good practice to follow. 6-8 years ago, a group from Transylvania visited Varsány, and as a result of the common discussions, by now they have created the brand ‘Székely Gyümölcs’ (‘Székely Fruit’), which Varsány now wishes to ‘bring back home’ and create the ‘Palóc Gyümölcs’ brand, following the foreign example. At this year’s meeting, they’ve managed to set the goals, and due to the experiences of the foreign visitors, they can also see it clearly how these goals can be achieved. The professional programmes, too, were organised accordingly and purposefully: they visited a number of enterprises engaged in processing local produces such as fruits. They visited Drégelypalánk, where home-grown fruits are used to make jams, syrups and other specialities; the next stop was Berkenye, with the main point of interest being the local cold store; then the trip ended on 26 June in Nagykeresztúr, in the Fruit House, where visitors learnt about the distillation of ‘pálinka’ and fruit wines. Due to the professional day, the visitors learnt about a lot of ideas which they can use to strengthen their own farms back home.

27 June was the day to discuss the events and experiences of the previous day together. Here they sought new, creative and forward-looking solutions to their common problem, that is, how to fill the villages with life again, and how to change the current, unfavourable environment.

The participants of the meeting came up with more and more ideas and programme plans. What everyone agreed on was that one of the most important challenges was to make the village’s economy self-sufficient, for which a basis of economic cooperation needs to be established. Most of the people want to stay in the villages, but it requires proper conditions. The twin town relations provide an excellent basis for international cooperation and a better understanding of each other. Retaining traditions and traditional values are also made easier by the support from the EU, and student exchange programmes help young people’s education. In small towns and villages, the most important goal is to hold the community together, taking any possible opportunity.

The support from the EU is becoming more and more important for Hungarian NGO’s, as strengthening the communities in villages and supporting family farms requires cooperation between volunteers, local governments and civil organisations. The ‘Europe for Citizens’ programme plays an important role in reinforcing European identity, too, as it helps to establish professional and personal relationships to rely on while seeking a way out of the current adverse situation. Judit Pintérné Kanyó emphasised: it’s not going to happen without civil organisations, because local governments are receiving less and less funding, and it may cause even greater difficulties in rural areas.

Right after the meeting in Varsány, locals and civil organisations began to think about how the experiences could be turned into practice. By creating a synergy between several other EU programmes, they seek to establish a sustainable economic model which can provide work for those living in the village, strengthen the family businesses in the region, retain the values of the Hungarian village for Europe and maintain the exemplary cooperation established with the foreign twinned towns.