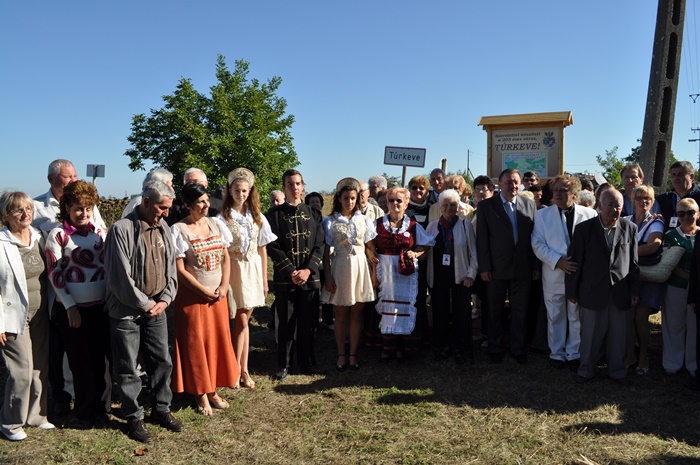 The ‘Past-Present-Future’ project brought together twin town citizens in Túrkeve between 6 and 9 September 2013. The event commemorated the 205th anniversary of Túrkeve becoming a town. The programmes of ‘Town’s Day’, coupled with the twin towns’ meeting, were attended by 112 foreign guests from Porabka (Poland), Nagyszalonta (Romania) and Auchel (France). Besides the delegations from the foreign and Hungarian twin towns, the programmes attracted many visitors and volunteers from Túrkeve, as well. We asked Ildikó Nagyné Bedő, Head of Department at the Joint Municipal Office of Túrkeve and Judit Tereminé Hanász Senior Counsellor about the 15,000-euro project, the varied programme offered and the most important outcomes.

THE MEETING IN TÚRKEVE ENHANCED THE EUROPEAN EXPERIENCE

Citizens from four municipalities celebrated the 205th anniversary of Túrkeve becoming a town. When and how was this relationship established?

Ildikó Nagyné Bedő: Túrkeve established its first twinned town relationship before the political changes in 1989, with the town of Nagyszalonta. The first such initiative came from the head of a non-governmental organisation, who later, as a mayor, launched a number of twinning initiatives – that, I think, was the most important factor, and of course, the partners who found each other. So the first twin town was Nagyszalonta, followed by Auchel in 2002, Porabka in 2004 and then in 2012, Rahó and Mezőhegyes. Besides, we also keep in touch with settlements other than our twinned towns.

What age groups did you involve in the project? Was there a specific target audience?

Judit Tereminé Hanász: Every generation was represented, from little children to pensioners. When visiting kindergartens, the children did a performance, and at the sport programmes, athletes were involved in the project. Túrkeve has a vibrant sports life, anyway: the participants could try everything from judo through football, basketball and handball to athletics, and this joint sport programme, which involved the twin towns’ delegations, also became a sports show – but of course, there were competitions and matches, too. Again, every generation was represented at these programmes; there was, for example, a pensioners’ club from Nagyszalonta, whose members were hosted by the pensioners of Túrkeve. There was also an arts exhibition, which also showcased the works of various generations. There were physically disabled people in the Túrkeve group and among the Polish musicians, too.
I. N. B.: All this goes to show that we focused on the diversity of genres, and the age groups were distributed accordingly.

What new ideas, solutions or methods would you highlight with regard to the implementation of the project?

I. N. B.: By default, an EU project has some obligatory contents and concepts, but certainly, there are always new ideas with regard to the given subject. What was interesting and unique this time was the implementation of the joint programmes. The common exhibition, the common folk dance or the presentations on tourism. We’ve met several times, and we’ve also seen the places in question; still, it was interesting to see these places from Mezőhegyes to Auchel in the form of presentations. The other thing, which is perhaps not so new, is that due to the informal atmosphere, the participants were more willing to talk openly about their experiences.
J. T. H.: I’d like to highlight two more things: one is the ‘I love you Túrkeve’ competition of urban history, preceded by a sightseeing ride on a horse-drawn carriage with a tour guide. During the sightseeing tour, the participants visited all the places which the questions later referred to. The other thing: if you do something yourself, your memories will be stronger. That was what happened at the Győrffy farm house in Túrkeve, where the visitors rode horses and fried ‘langosh’ themselves, taking an active part in the process – thus leaving with more vivid memories. Not only did they enjoy the benefits of the organised events, but they were also involved in the implementation.

You’ve mentioned a number of interesting and exciting programmes. What do your consider the most important outcomes of the twin town meetings?

I. N. B.: For me, the common folk dance was a unique experience, as Hungarian folk music and dance was followed by Polish, and besides the dancers, the audience happily joined the programme, too. Another memorable and magic event was the cake brought in, with its fireworks in the dark, as well as the special moments of the common activities. Also, the cultural gala, the opening of the exhibition, the common remembrance at the World War II monument, as well as the academic year opening ceremony of the music school, where the Polish guests introduced themselves, all enhanced the social experience.
J. T. H.: A further outcome is the reinforcement of human relationships, which also became personal during the meeting. The pensioners, for example, visited Nagyszalonta, and the Polish athletes will be participating in a training camp in Túrkeve. Individual relationships are all the more important because they will carry on the twin town partnership outside the programme.

What major EU-related events and experiences would you highlight?

I. N. B.: Although it’s very subjective, first I’d like to highlight the great and meaningful time the participants of the programme had together. You can learn incredibly much from such a weekend. The most important European values such as solidarity, integration, the common language and culture, as well as linguistic and cultural diversity were present throughout the programmes of the project. At the meetings, the strengthening European mobility was discussed, active citizenship was realised at a local level, the dialogue between cultures deepened, and of course, the participants’ foreign language skills improved considerably, too. The partners visited us and joined us with pleasure for some common thinking, and we were happy to find that, although we live in different parts of Europe, we can think together for a common goal. I also consider it important that we had an opportunity to exchange experiences, to discover the similarities of our duties and situations while visiting factories and institutions – the reason why we were able to think in a European dimension.