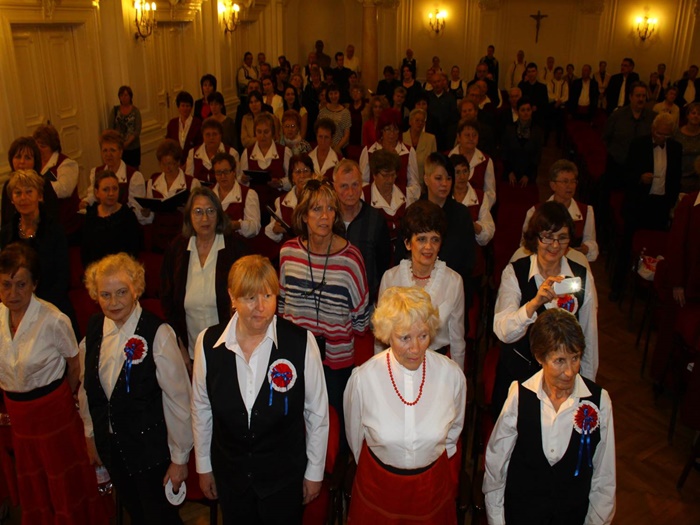 An amateur arts exhibition, handicraft workshops, folk music performances and a professional conference were all parts of a four-day event series organised by the local government of Újbuda in March 2014, with over 150 visitors from Serbia, Poland, Croatia, Slovakia, the Czech Republic, Romania and Hungary.

In spring 2014, the local government of Újbuda organised a special four-day event series called ‘Local Active Ageing and Creativity of Elderly People’ supported by the Europe for Citizens programme. The events were not only attended by professionals engaged in issues and initiatives related to ageing, but it also provided active and creative elderly people from seven countries an opportunity to meet.

FROM PROFESSIONAL WORKSHOPS TO A MULTILINGUAL ODE TO JOY

On the first day of the event series, the elderly amateur artists visiting Budapest and the members of the delegations from the seven partner countries met and visited the sights of the Hungarian capital. On the second day, the programme continued with a conference; at the presentations, among other things, the participants shared their experiences about former projects on ageing, implemented in Újbuda, but the biological characteristics of ageing as well as the benefits and psychological advantages of an active lifestyle were also discussed. Erika Asztalosné Zupcsán, Deputy State Secretary for Social Affairs at the Ministry of Human Resources, held a presentation on active ageing and the Hungarian experiences about the European Year of Solidarity Between Generations 2012. The representative of Târgu Mureş spoke about the importance of cooperation between civil organisations and the Church, and the guests from Ustron discussed the developments and opportunities of health and medical tourism in their own town.

The delegations from the seven countries also ceremonially signed a cooperation statement, in which they called the attention to the fact that it is a priority today for local elderly policy to respond to the diverse challenges of ageing with appropriate answers, opportunities and methods.

In the afternoons, workshops were held at various venues, where the senior volunteer communities of Újbuda presented themselves. The foreign guests visited an exhibition held at the Senior Ceramics Workshop and Painting School, where various works – folk embroidery, paintings and wood carvings – of elderly artists of Újbuda were showcased. Visitors could also join the handicraft workshops and see a film presenting the artists’ everyday life.

The event series continued with conference discussions on the third day. The topics included the case study of a community centre in Prague where members of younger and older generations can spend their time together, the public transport and health services provided to elderly people in Trogir, as well as a presentation on the psychological bases of a healthy elderly lifestyle. The day ended with a cultural gala and dinner, at the end of which the participants sang Ode to Joy in their own respective languages.

THE INTERNATIONAL RELATIONS OF AN ELDERLYFRIENDLY LOCAL GOVERNMENT

“Our former experiences and twinning relationships helped us a lot finding the right partners in Hungary, in the non-governmental sector and in foreign towns. At the same time, it wasn’t very easy to manage the transportation of the elderly visitors, to overcome the linguistic difficulties, and the visitors’ special  needs, such as healthcare, transportation and food, also required much attention. Nevertheless, the feedback received from the partners clearly confirms the need for such events”, says Project Leader Edit Pappné Mika.

“We are confident that our relations developed in the spring will be lasting, and we also wish to involve the younger generations – secondary school and university students – in the programmes targeting elderly people.”

The elderly generation is especially important to the local government, as out of the 140,000 citizens of Újbuda, 40,000 are over the age of 60. The district has already supported the elderly with a number of initiatives during the past few years, such as a complex programme aimed at improving the standards of living, and in 2009 it even won the ‘Elderly-friendly Local Government’ title.