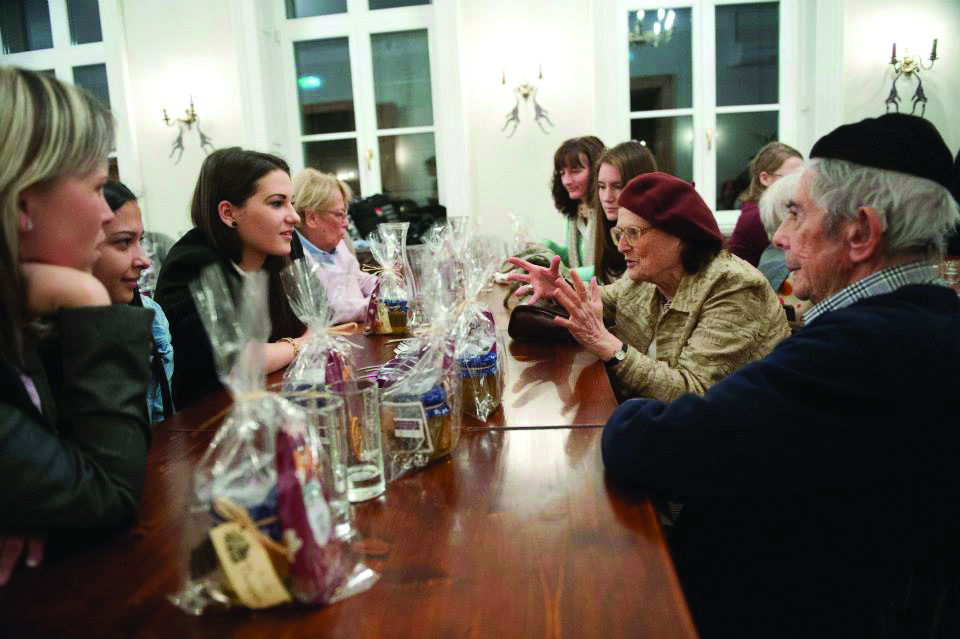 Anthropolis Anthropoligical Public Benefit Association has introduced a new method, suitable for use in secondary school history education. The method of digital storytelling encourages students to use photos and objects to present their personal experiences and family stories in short movies which can be shared with others. Within the framework of the Vitrine project, shocking, astounding and thought-provoking works were created.

STUDENTS' MOVIES ABOUT THE HOLOCAUST

With support from the EU’s Europe for Citizens programme, Anthropolis Anthropoligical Public Benefit Association tested and introduced a new educational method which can provide an alternative in secondary school history education. As part of the initiative called ‘The Family Narratives of the Soá – The Vitrine Project’, the technique of digital storytelling (DST) was first taught to teachers, who then encouraged their students to conduct individual and group work and look for objects and related family stories and anecdotes which can in any way be linked to the sufferings of the Jewish people during World War II.

Be it either pleasant or tragic memories, by the end of the process it will be clearer what they meant to you. "It’s an uplifting and reinforcing experience which brings you closer to yourself", says trainer and coach Barbara Máté, talking about the method of digital storytelling.

Students searched for photos and other visual materials to illustrate the memories uncovered, wrote a short script, and then they digitally recorded and edited the story. Shocking, astounding and thought-provoking short movies were equally created.

NOW THEY KNOW: THE MOVIE IS IN THEM

"We sought to convince as many people as possible that the Holocaust is by no means an issue which only affected the Jews. At the same time, we wanted to avoid a Hollywood-style account of this tragedy or students concentrating primarily on the numbers of the dead and deported to make their point emphatic.Although we received some responses that we shouldn’t ‘yet again’ tackle this issue, our achievements have confirmed us and justified the Vitrine Project", says trainer Balázs Nagy.

In the form of 3-day training sessions, 15 teachers were prepared to transfer the method of digital storytelling, the three main stages of which are encouraging children to find stories that are important to them, to present them through their own words and illustrations, and to share them – either only with their families and schools, or with the broader public through the Internet.

One of the teachers involved reported that in her group, consisting of 12 volunteering students, the stories and objects only appeared slowly at first; the children often became uncertain, their sentences faltered, they halted. But only until they visited the synagogue in Rumbach Sebestyén Street and met a young rabbi, whose friendly, informal personality quickly broke through the walls which the student built around themselves and the topic. The students began to criticise the practice of ignoring the Holocaust, and soon the first short movie was born, followed by more and more. Now they know that the movies are in them, and also that instead of answers, sometimes it’s enough to seek questions.

Altogether 64 short digital movies were made in the Vitrine project, 36 of which are publicly available at anthropolis.hu/projektek/vitrinmesek, and the teachers trained to use the method can teach the DST technique to newer and newer classes. Dozens of teachers gave the project implementers detailed accounts, and the Vitrine also attracted academic interest from, among others, Eötvös Loránd University (ELTE) and Central European University (CEU). The experiences gained in the project have also been published in the form of a methodological DVD.

“Not only is DST an excellent method to develop language, social and digital competences, but it can also be adapted to individual needs, and it also uses tools and a language which are close to the interests of students between the ages of 10-18”, Balázs Nagy pointed out. Experiences have so far shown that the students have learnt to adapt their wording to the limited length (which, in the case of DST, is 1.5-2.3 minutes orally and 180-320 words in writing), and they also learnt to use the editing software very quickly, which they can later benefit from, either in their spare time or when choosing a career.

“We are confident that more and more schools will adopt the methodology and make it part of their curriculum”, Balázs Nagy added.

‘Family Narratives of the Soá – the Vitrine Project’ was supported by the Europe for Citizens programme of the European Union, aiming to encourage citizens’ active involvement in building a common Europe.

The target group of the Vitrine project involved students between the ages of 10 and 18, as well as their teachers, and it sought to encourage children of both Jewish and non-Jewish families to conduct research in the topic.

Digital storytelling means that students rely on photos and objects to present their personal experiences and family stories in short movies, dubbed by the students themselves, which can be shared via data carriers (DVD, CD) or on the Internet, through social media sites or YouTube.

Anthropolis Anthropological Public Benefit Association implemented the project in cooperation with Lindenfeld Partners, committed to the preservation of Jewish culture and to remembrance, and the Unified Hungarian Israelite Community (EMIH).

Webpage of the project: anthropolis.hu/projektek/vitrinmesek