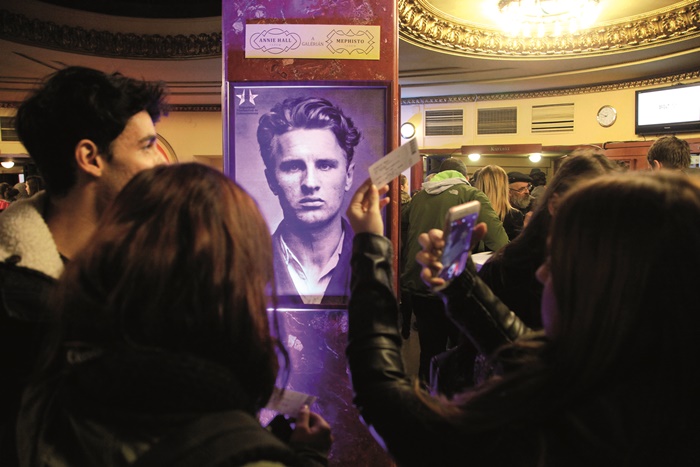 Students from four Central-European countries revived the history of communism and socialism through making their own movies. The ‘Behind Iron Curtains’ project combined interactive learning and free creative work to encourage secondary school students to study closely an era which they had only known from the pages of history books. Project Leader Norbert Szári, researcher of the Committee of National Remembrance answered our questions about the project.

Why did the Committee of National Remembrance launch the Behind Iron Curtains project?

We wanted the younger generations, secondary school and university students, to know more about the period following World War II, that is, communism and socialism. We sought to do it an interactive manner, by involving students and encouraging them to contribute to the creative work. The participants were given some information at a workshop, which they needed to complete with their own knowledge, research or perhaps what they had heard from their families. Then, under the supervision of history teachers, they made a movie in which they compared everyday life today and then.

The movies focused on everyday life. What other concepts did they rely on?

The children were given a free hand. Of course, we gave them topics such as travelling, leisure time or the situation of the media, but it was really up to them how they tackled the issues they were most interested in and what they chose for a point of reference. What made it all exciting was the very fact that we didn’t want to see an expected outcome but help them show how they saw the decades that followed 1946.

The project was implemented in an international partnership. Who were your partners?

Competent organisations from four Central-European countries: the Institute of Sociology of the Romanian Academy of Sciences, a private university from Łódź, Poland, an NGO, ‘Post Bellum’ from the Czech Republic, and the Committee of National Remembrance as the project leader. The workshops in Hungary were attended by sixty students, and altogether 24 movies were made in the partner countries.

How did the relationship between the four countries manifest itself?

The students were involved in the same process everywhere; the workshops, organised locally, were followed by making short movies, and then we all met in Budapest, at a student conference and film festival as the closing acts of the project. An important dimension of the cooperation was that the workshops featured a guest lecturer from each country.

Did the students also learn about the history of other countries in the region?

Yes, it was also important for us to show them that we had a lot in common in the recent history of the Central-European region worth discovering. In fact, one the project’s goals was to present the similarities among the neighbours within the communist and socialist systems of the era.

How could Hungarian participants apply?

We contacted vocational schools because we were looking for children for whom film making was, to some extent, already a common activity. Our domestic partner was Szent László Secondary Grammar School; they implemented the technical part of the project. The etudes were mainly prepared by the students of the Kőbánya school, but anyone who wanted to join could do so, because application was open. In order to make it as easy for the students as possible, they were allowed to use any technologies, without restriction to make the movies, so they could as well use their mobiles.

The project was closed by a film festival; how did that go?

The closing event of the project was held at Puskin Cinema, Budapest, where our regional partners were invited, too. The event was attended by nearly five hundred people, students with their teachers. We chose a feature film about the era from each country, and organised talks around them. We presented all the student movies, the three best of which were given recognition, and a special award was also presented by the professional jury. The movie programme was completed by a photo exhibition evoking contemporary moods from four countries, and the evening was closed by a pop concert.

What topics did the award-winning movies discuss? What issues interested the students most?

It’s a long period, and the spectrum of the movies in terms of content and genre was quite wide. Two out the award-winning works – a Polish and a Hungarian movie – adapted a fictitious story, serving more to reflect an atmosphere through an imaginary event. These movies presented the characteristic features of the era. The Romanian movies took a more documentary approach. They adapted concrete topics, one being a labour camp and the other a Romanian state celebration from the communist era. Absurdly, it is 23 August, the day of Romania’s switching sides in World War II, which coincides with the date of the Molotov-Ribbentropp pact.

Of the half a century following World War II, which was the period that inspired the students most?

They didn’t concentrate on the last decade of the regime, the 80’s. Instead, they drew inspiration from the first period, the 50’s and 60’s, when oppression was at its height. But there were also movies which overarched the entire era and tried to present a progress curve.

How much emphasis were family stories given?

There were some family stories; a Hungarian movie, for example, which approached the past through the relationship between a grandson and his grandma. There were also some which weren’t happening during socialism but, tried, on the contrary, to present its aftermath through, for example, the difficulties of a generation gap. The way students combined their knowledge and their own experiences has produced very varied results from this point of view, as well.

What do you think the most important achievement of the project was?

The participating students gained a much deeper knowledge than they would have by just listening to a lecture, because they were actively involved in obtaining and processing the information, and then they needed to put even more effort into it by summarising it all in a movie. In fact, they developed an opinion or image of the era that followed 1946 through their own efforts. It’s an extremely important historical period which you need to know in order to understand the current processes.

Interestingly, there wasn’t one single solution among the movies which was very different from the others. Of course, we saw some original approaches, but we can say that more or less all of them followed the same direction. Such as everyday life in the old days was similar everywhere, today’s experiences used to present it are similar, too.