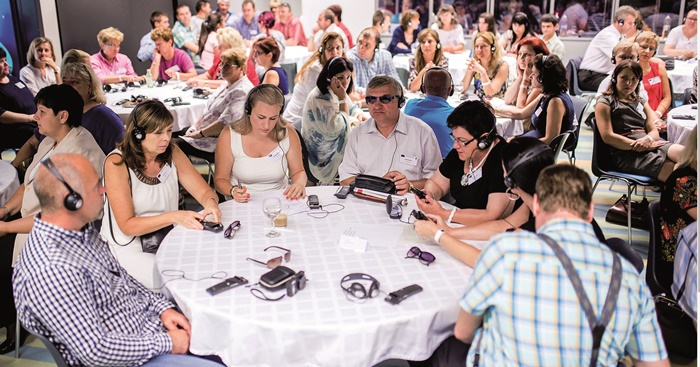 “Equal opportunity is not about declaring that people are equal. We are diverse and different; we must give everyone the kind of help they need”, said Gergely Karácsony, Mayor of Zugló, at the opening ceremony of the event organised under the Europe for Citizens programme. In the project, professionals specialising in people with disabilities came to Zugló from four countries to exchange experience about the situation of education, the employment opportunities of people with disabilities and relevant EU programmes. These were the topics we discussed with Rita Andrasek, Head of Applications Department at the Mayor’s Office, Zugló, and Orsolya Kovács applications officer.

Zugló has had a long-standing relationship with its twinned towns; however, it was the first time that the leaders had met to discuss matters related to people with disabilities.

The idea came from the fact that Zugló has a number of institutions for people with disabilities. The Primary and Secondary Grammar School for the Blind, the Institute for the Blind, the Primary and Secondary School for the Hard of Hearing, the School for Movement Improvement, as well as national measurement centres and a number of civil organisations are all located here. The leadership of the district is also committed to the issue.

Your town twinning relations are very diverse: you keep contact with towns in the Czech Republic, Poland, Bulgaria and Romania. What did the town leaders there think about your idea?

They responded very enthusiastically when they learnt that for the first time now our usual meeting would include such a special programme. Of course, there are institutions and organisations specialising in this area everywhere, so Opava, Racibórz, Veliko Tarnovo, Csíkcsicsó and Alsórákos also gladly accepted our invitation. Besides the leaders of the institutions and civil organisations concerned, people with disabilities were also invited.

Hosting 80 people for three days must have been preceded by careful planning and organisation. What was your schedule?

The conference on Friday was held at the Civil House of Zugló – that was the professional part of the programme. There were lectures and presentations, where each town had an opportunity to introduce themselves. Then, in the afternoon, we set off and visited various institutions in Zugló. However, we had so much to discuss that the talks continued even there – until 8 in the evening! Meanwhile, the programme at Civil House continued with an Equal Opportunity and Cultural Festival, organised by civil organisations of Zugló. A wheelchair dance group, a sight-impaired reciter, acrobat clowns and singers entertained the audience.

Did the participants also have a chance to talk informally?

Of course, during the common meals and walks. The guests gradually warmed up and began to ask more questions, with more self-confidence. The second day was more open; we wanted to involve the local citizens, too, so we joined the usual Gastro Festival with equal opportunity programmes. Besides the cooking contests, we also organised a number of sensitisation programmes, such as a wheelchair obstacle course, mouth painting and one-handed snack-making. It’s great when you can put yourself in others’ shoes, when you are faced with challenges which people with disabilities need to overcome day by day, only in much harder circumstances. But sight-impaired masseurs were also available, which, of course, was very popular.

How open are the citizens of Zugló to this issue? Besides such specific programmes, do they have an active relationship with the people with disabilities in the district?

Making contact doesn’t happen automatically. We believe that the representatives of the majority society, in this case, us, need to ‘push it’, since, although integration in Hungary does work (many kindergartens and schools admit children with moderate disabilities, helped by peripatetic teachers), the majority of the looked-after children and young people live or study in segregated institutions, because they can get the necessary special development there, in proper circumstances. Undoubtedly, however, thus they become a bit ‘locked up’, which the institutions seek to counterbalance with various external programmes. We have already learnt that this will always require some exciting programme that appeals to them anyway. We applied the same approach to adults: we knew that Gastro Festival will attract many visitors, so they got involved in sensitisation unaware – they didn’t feel forced to do so.

What were the lessons drawn from the conference itself? Are there any significant differences between the care systems of the countries involved?

We broke down the presentations to three areas: education, employment and EU funding programmes. We found that the educational system was well-organised everywhere: every child with a disability had access to the schooling opportunities they needed, from kindergarten to higher education. They can learn a trade, take the ‘maturity’ exam’ or go to university. However, it also turned out that problems everywhere began afterwards, when people with disabilities need to go on to start their adult lives and manage on their own, getting a job and a home. Then they have less to rely on.

Assumably, however highly skilled people with disabilities are, they will always need some positive discrimination from the majority society in order to manage, since their integration will always require a little more attention.

That’s true, but it doesn’t mean at all that a company couldn’t benefit from employing somebody with a reduced capacity to work. One of the participants told us, for example, that when they took on an autistic young man who needed help, within a few months they found that team spirit considerably improved, and attention and empathy towards each other increased among the staff. Interestingly, one of our guests, the Deputy Mayor of the Czech town is blind himself, and he told us that he did have to overcome difficulties to have himself accepted. There are some positive examples, too, but unfortunately, they’re not common. The leaders of many companies never get to the point where they find out about the benefits of such a situation. And as for the EU-related workshop, it was mainly about how beneficiaries used the funding they got. We also learnt that, although the opportunities provided centrally were different everywhere, professionals and the civil society faced the same challenges, and were glad to hear about each other here.

Have you got any feedback from them? Have you found out whether the programme has been useful to them and how they’ve benefitted from it?

We consider feedbacks very important, so we’ve sent questionnaires to them and are still waiting for the responses. However, we’ve already drawn some lessons: next time, we’ll try to make it a two-day event, because it was very fast-paced and we wanted everybody to get a chance to speak. And although our guests thoroughly enjoyed the programmes, they were exhausted by the time they finished. We think the most important thing is that we enabled those coming from various countries to make contact. Now it’s up to them to find out how to take advantage of the multitude of opportunities which arise.