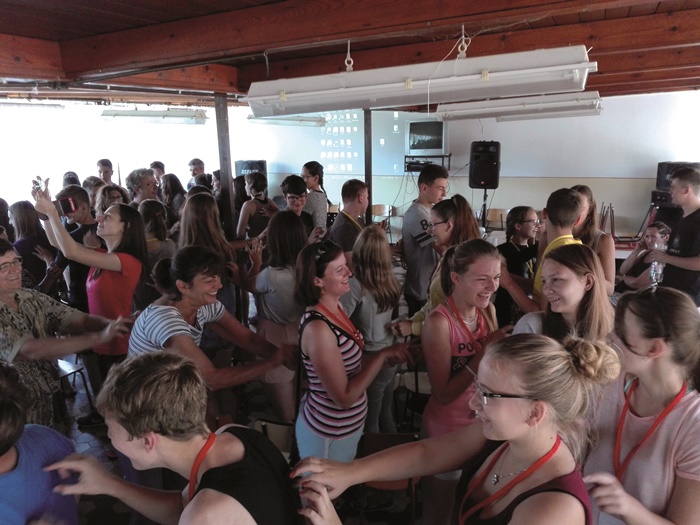 The lack of a local hospital, the decreasing number of jobs available or alcohol and drug consumption among youth are not typically the issues left to secondary school students to solve; however, they, too, are interested in more serious issues, and if the appropriate circumstances are ensured, they gladly work on the solutions, as it turned out during the implementation of the Civil Courage project. Students from six countries were given an opportunity by Cikk (Article) Association to practice the cooperative techniques of managing public affairs. We asked specialist leader László Edényi about the project results.

What does Civil Courage encourage young people to do?

We seek to encourage secondary school students to become active citizens and assume a role in matters that they find problematic.

What issues did the project address?

Local issues which the students are part of and affected by. If they begin to work on them, pay attention to them and assume a role in their solution, then it has an important European dimension. It is because assuming responsibility and standing up for local communities leads to active citizenship. And the competences gained in the field of taking on issues and handling problems go beyond that one single case they’re just trying to solve. During this process, they acquire a way of thinking and skills which may help them solve problems throughout their lives.

Why did you choose to involve secondary school students in the project?

They’re the ones who can be most easily shaped in this field. Also, they’re easier to address through schools. And the third reason was that the Municipality of Kőbánya, a partner in the Civil Courage project, has a traditional programme, a so-called ‘town twinning camp’, organised for secondary school students. Our project was built on that town twinning citizens’ meeting.

Who were the participants of the attitude-shaping programme?

We invited guests from five twinned towns, and added one extra twinned town community to the project, who had not been involved in this partnership at the time when we applied, so they participated with support from the municipality. Hungarian students from Slovakia and Transylvania, as well as Polish, Czech, Greek and Croatian students camped together in Balatonlelle. These students all spoke English.

How did the students get involved in the issues?

We had corresponded with the participants one month before the August camp. We asked them to prepare an introduction to make the others familiar with the team, their local communities and the places where they lived. Our other request was to bring along an issue which directly affected them, too, which needed a local solution and in which they wanted to make progress.

What were the steps of discussing the matters brought from home?

The meeting was held in Budapest, where we waited until all the participating teams arrived, and then we travelled to the camp of the municipality in Balatonlelle by bus. Once there, each community and town introduced themselves first, and then they described the selected local issues. That was done in various ways, using illustration, role-plays or presentation.

We were particularly glad to see that it wasn’t all presentations, and local issues were presented in very varied ways.

The next programme element was to form team pairs based on linguistic and cultural similarities. That was how, for example, the team from Párkány (Stúrovo), Slovakia, was paired with Balánbánya (Balan), Székely Land, who could speak Hungarian as a common language. The other couple was Jaroslaw, Poland, and the Czecz Letovice; due to the similarities between Slavic languages, they managed quite well in their mother tongues. The third group included Greeks from Litochoro and Croatians from Vinkovci, who spoke English. The groups needed to discuss and work on a particular topic, and make suggestions on how to solve the problems.

What issues did the students focus on?

For the Croatians, it was the lack of bikeways, whereas the Greeks focused on the anomalies of waste disposal, putting tourism and nature at risk. Those from Balánbánya would like to ease the shortage of job opportunities, which caused many to leave the town. The students from Párkány were concerned that the nearest hospital was 50 kilometres away from them, making healthcare very difficult. The Czechs were concerned about young people’s deviancies: many use drugs or consume alcohol in public spaces, which, besides the obvious health damages, also causes public indignation. The Polish group highlighted the lack of sign language skills and the difficulties of deaf people arising from that.

How did the groups adapt each other’s topics?

First they had a joint discussion on how the given issue was handled in their own respective countries, and whether they had any examples for how these problems can be solved. Then next day, they worked out a proposal for the solution. As a part of that, they also prepared an action plan to help them elaborate how problem-solving should begin.

The next step was to present the proposal. That could be done in various ways, for example by illustrating the solution through drawings on a board. Each presentation was 10-15 minutes long; thus, a long presentation was compiled. They also needed to assess each other’s work in terms of the extent to which their proposal offered a real solution, and how clear and effective the illustration was.

Was it serious work that the students did?

They often felt it was almost just a game, but I think what they did was dead serious. If we don’t promote a problem-solving attitude and standing up for local issues, then the prevailing thinking will be that everybody else is to blame for everything and we have nothing to do. Unfortunately, this passive attitude is rather widespread in Hungary, too. The teams performed at very high standards, and apparently, they can approach certain issues in a complex manner already in their secondary school years.

Of course, besides the specialised programme, the students also engaged in various leisure activities. They discovered a section of the south shore of Lake Balaton, played a quiz game about their towns, took a summer bobsled ride, tried indoor climbing, visited Tihany, and of course, they couldn’t miss out on going to the beach, either.

What do you consider the most important benefit of the project?

The most important thing is that, on the one hand, we encourage participants’ active involvement, and, on the other hand, we try to develop a certain attitude. It’s also important that, meanwhile, intercultural relationships are born, and young people from various backgrounds get to know each other and the others’ problem management strategies. These things together represent the greatest achievements. We would like to continue the programme next year, and although not necessarily with the same focus, but in a similar manner, organising a camp.