Main PageStories and best practicesMore Than a Camp
Europe for citizens 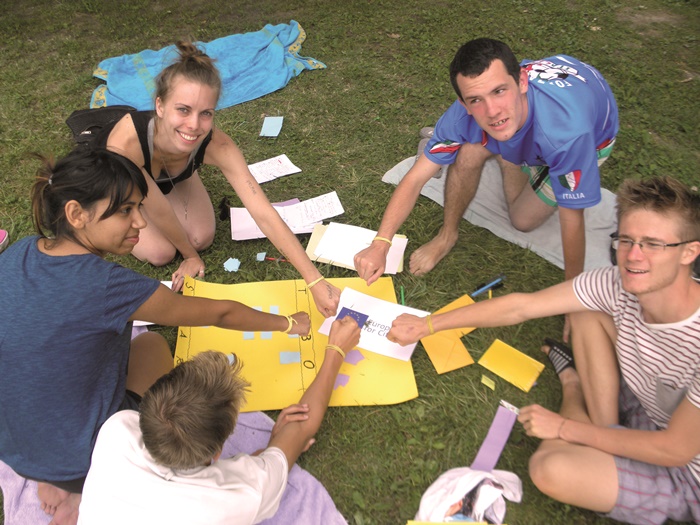 The state in Hungary takes care of children whose parents are unable to do so for some reasons. It provides them accommodation, education, food and clothing. However, there is something it only has a limited supply of: love and caring. It has been a long-standing problem that when these children become ‘adults’ and get out of the social care system, they become perhaps even more helpless than before their years spent within the institution. They don’t know what to do with their lives or how to do it. That is where Csepp a Tengerben (Drop in the Sea) Foundation tries to help them – recently through the opportunities provided by the Europe for Citizens programme. We talked to Zsófia Restár, the Foundation’s volunteer and project manager.

MORE THAN A CAMP

The Foundation’s work began at a children’s home in Pilis, and as far as I know, it’s still concentrated there. How long have you been helping the young residents as volunteers?

Our organisation has been working with children of 6-18 in state custody since 1997; I’ve been doing it for six years. All the members – about 25 – are volunteers. Sometimes people come and go, but there’s also a member who started here as a university student and is now a mother with children. Typically, those who get involved in this find it hard to leave completely; they will at least continue to support one or two children, regularly organise one particular programme or give donations.

What is it that you can add to the work of childcare professionals?

In children’s homes, the little ones are given food, they have somewhere to live and they can go to school. That’s a great thing, but it about sums up all that they get. They are, however, in a bad need of emotions. We can’t even imagine the kind of life they have, since most of us have had someone around us since birth to take care of us, to encourage, teach, educate and love us, and to be there as a role model. They miss all that, and the moral and psychological foundations thus acquired are very hard to make up for. We can give them our presence and our attention; they get our exclusive attention.

What lead you to applying for organising a camp within the Europe for Citizens programme?

We frequently visited that particular children’s home in Pilis, giving home to about 90 children, and later other institutions in the area, too. Those who could, visited them weekly, while others went there every two weeks or monthly, as their lives allowed them to. After a while, however, we found that it was not enough just to go there and organise programmes. We want to get a grip on derailed lives, at the very point where the crisis begins. Typically, these children rebel. Nine out of ten want to leave the children’s home as soon as possible, because they long for freedom. However, they live a very secluded life, and they don’t see other sides of the outer world, its dangers or, for that matter, duties. Besides, neither do they have such practical skills or knowledge required for an independent life as how to buy a railway ticket or how much it costs to rent a flat. We wanted to tell them all that, and, most of all, talk about how they can have a chance to manage and get a job. We thought the best way to do that would be to spend time intensively and actively together, and we came up with the idea of a summer camp.

Summer camps are usually associated with carefree fun, rather than conscious planning for the future.

You shouldn’t think in terms of a conventional camp. It’s enough to remind yourself that these teenagers need to share a home with 8-10 others, where they sleep, eat or wash clothes together... Their entire life is like a camp. So we tried to make this one week resemble a family get-together with few rules, and not a camp at all.

Were they also accompanied by the care staff?

Yes, they were, which proved a good decision. During the last days, the children told us that their relationship with the staff was improving. That was because the adults could see a different approach to talking to the children – not as an authority but as partners. In return, they can feel the trust and, interestingly, they don’t abuse our trust. Otherwise, we try to relate respectfully to the staff, because we know how hard it is for them. One adult takes care of eight children, having to cook for them and wash their clothes, and I really can’t blame them when they don’t have any strength left to be nice and give individual attention to each one of them. They were rather reserved with us when we met, because we’d brought everything that was fun, laughter and leisure programmes… I know it’s not quite fair to them, but from the children’s point of view, it doesn’t matter who gives them these things; what matters is that they get them.

The camp you’d planned was finally organised in Balatonakali, with about a hundred participants. How did it go?

The central theme of the eight days was future, to be exact, the future of children in care in various European countries, as we had participants from children’s homes in Slovakia, Serbia and Transylvania. We sought answers to issues such as vocational opportunities at home and abroad, popular trades in various countries of Europe, trends in starting a family, and we also addressed common practical issues. During the meeting, the participants were guided through an ‘Interactive Career Casting’. We organised a series of presentations, a board game designing workshop and visits to local enterprises, such as a goat farm, a herbal enterprise or a winery. The children in care and their caregivers attended a psychodrama session held by a psychologist and a playback theatre performance. With all these programmes, we managed to open doors inside the young people’s heads and make them realise that they, too, were valuable citizens of Europe, and that their own future and Europe’s future were connected.

But did they have some free time, too?

Of course; they swam in Lake Balaton, visited an adventure park and went on a bicycle tour; these were all great experiences for them, which some of them had never had before. It’s shocking, but for many of them conversation itself was also such experience. There was someone who said that no one ever had asked him before what he wanted to be. All that made the talks in small groups difficult to begin, but they soon got the hang of it. We talked about unintended pregnancy, finding employment abroad, and generally about the fact that achievement requires effort: you need to learn and work.

How did the young people say they felt?

They had a great time. During those eight days they may have been given more attention than in a whole year. They also got on well with each other. It was useful for them to see that their foreign peers were struggling with similar difficulties. But I think the main achievements were the new knowledge and awareness. They often sink in self-pity and keep saying that on one needs them, anyway. We made them aware that they, too, were very important. Mum and dad may not be there every day, and may never be, but then they should be important enough for themselves to pay attention to these things. We can’t be near them every day and can’t change anyone’s life, but at least we can give them some nice childhood memories, self-confidence and encouragement. It may take twenty years, but one day it will become important.